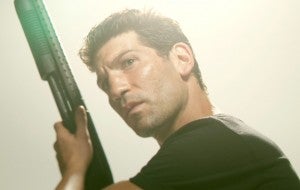 At the Phoenix Comic-Con this weekend, there was a panel called "Jon Bernthal Vs. The Walking Dead," in which the recently-offed star appeared to talk about his experiences playing Shane Walsh on the smash-hit AMC TV series. Bleeding Cool was there to cover the event, and brought back some interesting reports from the weekend. Having never read the comic book series before he took the role, Bernthal reportedly didn't do so during his many auditions, either; it wasn't until after he had already landed the role that the actor says he finally got his hands on some of the comic books and took them home with him. "I opened the comic, started reading, and eating a sandwich," the site quotes Bernthal as saying. "By the time my sandwich was gone, my character was dead. I was like, 'What did I just do?'" One thing he didn't do, though, was convince the filmmakers to see their way clear to softening Shane just a bit in his final moments. While it's been mentioned before that the actor had a slightly different ending in mind for his character, he told the panel in detail what he'd hoped to talk them into. From the BC article:

He wanted Shane to knock Rick's gun out of his hand, then they'd wrestle, Rick would stab Shane, and Shane would reanimate as a zombie, as we saw. Here's where it differs. Rick would grab Shane's gun, intent on killing the zombie and it would click. Click. Click. No bullets. The idea was that Shane had never intended to kill Rick at all, but had brought Rick out into the woods to kill him. Jon Bernthal is convinced that Shane knew he was a cancer to the group and that he had to go. He just wanted Carl and Lori to be safe and for Rick to man up and take the role he was supposed to take. He said he truly believes that Shane was never as heartless as he wanted to appear that he was, and that's what makes him so entertaining to watch.

returns to television in October, this time without Bernthal, who will take a role in L.A. Noir, the new TNT series from former The Walking Dead showrunner Frank Darabont.