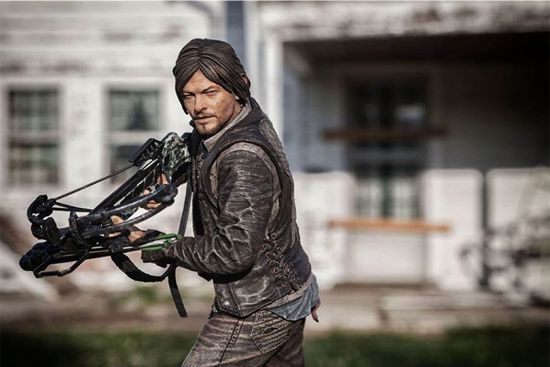 In an exclusive interview with Comicbook.com, McFarlane Toys Founder Todd McFarlane talked about a variety of subjects, including the latest on the Spawn movie and what he's got planned for the future of his popular Walking Dead action figure line. McFarlane will be appearing at the Times Square Toys R Us on Saturday, February 1 to sign a couple figures from his NFL Football line. However, outside of sports, it's The Walking Dead which rules the action figure sales charts. The line has been so successful that McFarlane is currently hard at work, planning a new product line revolving around the property. Comicbook.com: Between the sports line, video game line, and TV line with The Walking Dead, which is selling the best out in stores? Todd McFarlane: Well, sports-wise Football is always the biggest, as you might imagine. The biggest sport has the biggest advocates that want to collect some of the stuff. And there's also the built-in piece of it that baseball doesn't necessarily have where the bulk of games that actually matter come in the fourth quarter, which is Christmas buying season. So that you put out football toys from the most watched sport by far in the country at Christmas time, it isn't surprising that we sell a lot of football product. And then, year end, Assassin's Creed did pretty well for us. We have this new kid line called Rabbids from Nickelodeon that we're hoping will continue to grow. The Walking Dead right now is head and shoulders sort of our big what we call our non-sports toy line. Comicbook.com: I'm assuming that you probably almost can't make enough of the Daryl Dixon figures. Is that by far your best seller? Todd McFarlane: Yeah, and it's funny, because when you start doing things like Walking Dead and other lines of TV and movie figures and characters, people just sort of pick their favorites, no different than picking their favorite football, baseball, sports figure. So absolutely, Daryl Dixon, you know Norman [Reedus], he's got a huge following, and he's a big advocate. He's actually come in our office and allowed us to scan him, because he lives out in the New York area. And he's gone, "Hey, if you ever need me up there, I'll come up there." So the latest one we had, the ten inch figure of Daryl was based upon a scan. Norman had come in and given us his time, so that we could get it as accurate as possible. Comicbook.com: Do you have plans to do a Hershel figure? Todd McFarlane: It's one of those ones where some of the main characters that people want we're only rolling out five, six, or seven at a time, and there's always going to be somebody that you miss. Just like with sports, every time we announce a line somebody always thinks that their favorite guy got hosed. But we're also developing another sort of sub-product of Walking Dead that will allow us to be able for sure to bring in not only the Hershels of the world, but even some of the what I would call "C" characters, and it still makes sense. When you're doing the six inch figures, you have to be a little bit more particular of who it is you're picking because again you've only got six to choose from. And all of a sudden by the time you make somebody who might be hot in Season 3, it doesn't come out until Season 4 or Season 4 and a half, and there's a whole other group of characters that the fans have fallen in love with. And you've got to be as much contemporary with the new characters they keep introducing in the show, and they'll continue to introduce in the show. Eventually, we'll get around to everybody that had an impact, and the Hershel character is one of them. Comicbook.com: Is the new Walking Dead product line like mini-figures or is it something completely different from action figures? Todd McFarlane: It will be a mixture. It will be figures and some other sort of prop stuff. We're just in the process of getting our costing of it and presenting it to some of the store retailers. They've seen some of it, and they're pretty excited about it. We're probably about a month away on making a big announcement on what that stuff is. Stay tuned to Comicbook.com for more from our Todd McFarlane interview in the upcoming week.