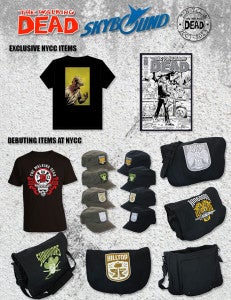 Image Comics today announced exclusive comics, t-shirts and other merchandise available at next week's New York Comic Con, including a 10th anniversary commemorative edition of The Walking Dead #1 that's been colorized for the first time and a limited-edition copy of Lazarus Volume 1 with a bookplate that will be available only during Greg Rucka and Michael Lark's signing appearances. Other merchandise available at the show includes exclusives from the critically-acclaimed series East of West and Chew, as well as Amy Reeder's hugely-anticipated Rocket Girl.

Here's a rundown of the exclusives available at the show:

In addition to the limited edition exclusives, Skybound Entertainment will be debuting a brand new line of THE WALKING DEAD merchandise for fans of the hit comic: