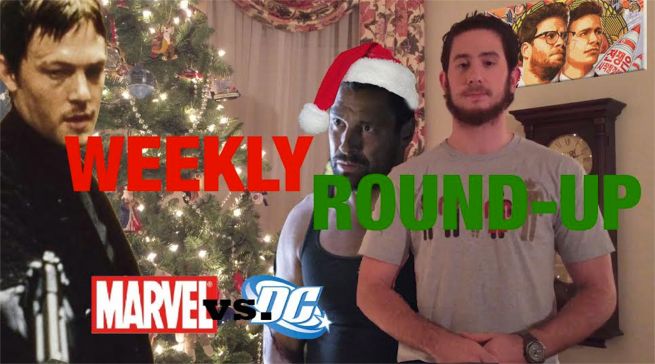 Comicbook.com's weekly round-up brings fans a collection of the biggest stories of the week in comic books, movies, television, and video games. For the week of December 26, host Brandon Davis covers The Boondock Saints 3, Marvel Vs. DC, Arrow, and more.

It seems pretty clear that another installment of The Boondock Saints won't happen without Norman Reedus, whose popularity has grown exponentially since he appeared in the franchise's first installment in 1999. During an AMA on Reddit this week, Norman took questions, mostly about the Walking Dead, but seemingly confirmed The Boondock Saints 3 by saying, "Yeah, it's on. In the works, happening."

Don't you think it would be amazing if in some perfect world we could see Marvel and DC characters go head to head in a live-action big screen event? You're not alone. YouTube user Alex Luthor got us about as close as we'll probably ever get with his homemade trailer that even trended on Facebook it was so epic. Who do you think would win in a real battle between Marvel and DC characters?

Looks like Manu Bennett is as ready to return to the Slade Wilson character as we are to see him again. His character was last seen in season two of arrow, being locked away in prison by Oliver Queen, but based on a recent tweet, it seems like we may see him again soon. Manu Bennett tweeted this photo, with the caption, "Time to make a comeback kids – Slade." It's unclear how exactly we will see Slade or Deathstroke, but we'll see starting January 21 when the Arrow returns.

To the dismay of some of our users, Justin Lin has been announced to direct the third installment of Star Trek. Justin Lin, who is credited with reviving the Fast & Furious franchise, and currently one of the most sought after directors in Hollywood, has been given the task of taking us back aboard the Enterprise. The film is set for release in July 2016.

That is a picture of my ticket to see The Interview at the Alamo Drafthouse in Katy, Texas. The film was reinstated to almost 300 independent theatres after Sony Entertainment pulled the film due to hacker threats against theatres showing the film. After being reinstated, Sony also announced the film would be available through a number of On Demand applications starting on December 24.

So, you're all caught up on the biggest stories from this holiday week. A handful of movies hit theatres this week, but are you going to stay in and watch The Interview? Let us know in the comment section below or by tweeting at us, @Comicbookdotcom. On behalf of Comicbook.com, I'm Brandon Davis, I'll see you next year.