The Ranger Slayer is already making an impression on the Power Rangers, and their lives are about to get even more difficult.

You can check out the gorgeous covers to the issue in our exclusive preview, which features a stunning Ranger Slayer Kimberly and Drakkon cover by Dan Mora, a Blue Ranger spotlight cover by Miguel Mercado, a Power Rangers throwback cover by Audrey Mok (featuring Madame Woe), and a movie parody cover by Natacha Bustos based on The Goonies.

You can find the official description of Saban's Go Go Power Rangers #12 below, and the covers can be found in the gallery.

"In Saban's Go Go Power Rangers #12, from writer Ryan Parrott and artist Dan Mora, the Rangers team up with an unlikely ally to battle Rita's new monster as the Ranger Slayer inches ever further towards her goal. This issue features a main cover by Dan Mora, with variant covers by Miguel Mercado (Over The Garden Wall), Audrey Mok (Archie) and Natacha Bustos (Moon Girl & Devil Dinosaur)." 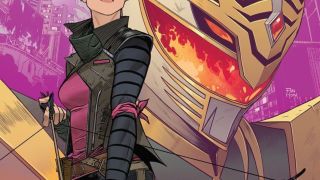 While fans might not see how she got the Bow of Darkness or the Grave Zord (though there is a chance we might), they will get to see how the Drakkon universe Kimberly ended up taking on the mantle of the Ranger Slayer, and BOOM! Studios editor Dafna Pleban says it is going to hit hard.

So, what do you think of Go Go Power Rangers so far? Let us know in the comments!