Shattered Grid officially kicks off in Mighty Morphin Power Rangers #25, and amazingly the first issue managed to live up to the hype.

This will be a spoiler-free review of Mighty Morphin Power Rangers #25, so read on without worry of killing any of the big surprises.

Shattered Grid carries some lofty expectations, and it should honestly, as it seeks to tell a story that involves some of the franchise's most iconic teams. The story's ambitions are high, but writer Kyle Higgins keeps the epic story grounded through character work that has become a hallmark of the series, and gives some special attention to two love-crossed Rangers in particular.

The Rangers have never really faced someone like Lord Drakkon, and the only two that really have extensive experience with him are Billy and Tommy, and even they haven't seen everything the villain's capable of. Sure he's evil, but there's so much more to Drakkon than just cookie cutter villain-dom, and his ability to manipulate just about any situation to his favor is on full display.

Higgins' love of the franchise shines through, creatively implementing several key figures from Power Rangers lore seamlessly, each layer enhancing and never detracting from the book's main focus. You're in for some big shocks, but even the biggest ones also promise new and unexpected detours that will take the book in bold directions moving forward.

None of these moments would resonate near as well without the art of Daniele Nicuolo and Walter Baiamonte. Bright colors are a vital part of any Power Rangers project, but it's the warm hues and moody lighting that help create a genuine sense of atmosphere, regardless of if the Rangers are standing in front of a movie theater or next to Zordon. That all comes together to create some surreal moments that literally pop off the page, ones you'll want to frame and hang on your wall.

Oh, and you can go ahead and thank Nicuolo and Baiamonte for creating some of the slickest looking Time Force Rangers around, though their work on the Mighty Morphin team is worth praising too.

The biggest thing "Shattered Grid" does though is take risks, and it's an aspect of the franchise that is immensely welcome. Higgins doesn't pull any punches, and while the choices here probably won't sit well with every fan, the fact that the series isn't afraid to take those risks is worth commending. It also promises some big changes, both in terms of lore and the dynamics between the Rangers themselves, creating unique possibilities that wouldn't be available without taking some big leaps. 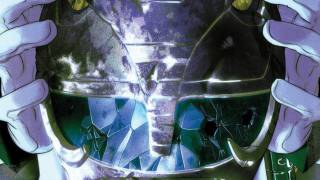 "Shattered Grid" takes all the aspects you love most about the franchise and weaves them into a storyline that delivers tension and stakes, something longtime fans will most certainly appreciate. Coupled with some stellar art, this is the Power Rangers event you've been waiting for, and it more than delivers.

You can also check out our spoiler-free review of Saban's Go Go Power Rangers #8 here.