Rita has finally shown her hand, but the Rangers might fall apart before they can do anything about it.

One of the best parts of the Go Go Power Rangers series is the glimpses into Rita's past, showing how the brutal Empress came to power. This issue actually goes above and beyond in that regard, giving fans the previously unknown origin of a longtime favorite, and hopefully, he isn't the only one fans will get to see explored this way in the future.

Moving on the current story arc, this issue progresses the story forward quite a bit. By the end of this issue, all of the major subplots get a substantial push with a solid hook for the next issue. While the movement is nice, the hallmark of this series is how it approaches the characters and this issue far from disappoints. 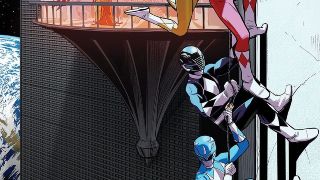 Writer Ryan Parrott excels at delivering monologues and speeches with just the lightest touch of melodrama, making it feel genuine to the Power Rangers universe without going over the top. That nuanced touch is especially evident during Billy's meeting with Promethea, a poignant sequence that perfectly captures the heart of the character with an almost John Hughes vibe.

That attention to depth is visible in the entire cast, as each character is allowed to be flawed and grow from their mistakes. You won't always agree with their decisions, but that's what makes them interesting, and therefore gives fans a whole new appreciation of the team.

It also doesn't hurt to have such a talented art team on hand. Dan Mora, Raul Angulo, and Ed Dukeshire are a Power Rangers all-star team and deliver stunning sequences and picture-perfect Rangers that feel as if they stepped out fo the show. There's few better at bringing the Rangers to life than this team, and hopefully, they aren't going anywhere anytime soon.

If there is one negative, it would be the rather out of place Bulk and Skull subplot. It's not detrimental by any means, but feels jarring, as it is sandwiched between two rather critical points in the story.

Saban's Go Go Power Rangers #6 is another fantastic entry in the series, a series that shines due to lovably flawed characters you will always find yourself rooting for. If you're a Power Rangers fan, you owe it to yourself to give this series a chance.