Star Wars: The Last Jedi has a new TV spot courtesy of Nissan, and you can watch it above!

Titled "Dark Side", the commercial promotes the Nissan Rogue with a little Star Wars flare thrown in for good measure.

The ad starts off with a dad and daughter going shopping for a Nissan, and when the teenage girl gets behind the wheel of a Nissan Rogue, she's instantly transported onto the deck of a First Order Star Destroyer, where we see Captain Phasma and one of her Storm Trooper regiments marching by.

It's a cute little commercial, though the point is confusing: it seems to say driving a Nissan Rogue will put you on the dark side of things. Then again, the Star Wars baddies get almost as much love as the good guys, so this should definitely sell some cars.

Fun fact: this commercial was directed by Shawn Levy, one of the creative minds behind Netflix's Stranger Things. So in a way, maybe that girl in the Rogue was getting a nice visit ot a Star Wars-themed version of the upside-down. 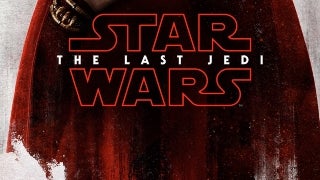