The superheroic alter-egos of the Riverdale Gang are set to square off against the Mighty Crusaders in a new story from writer Ian Flynn (Jughead) and the art team of Kelsey Shannon, David Williams, Gary Martin, and Jack Morelli.

The main cover is part one of a two-part, interconnected cover that will play out over two issues of the story. The issue also features a variant cover from Tom Grummett, the veteran artist whose creator-owned series, Section Zero, recently funded a new volume via Kickstarter. He has some experience blending traditional superheroes with fanciful, iconic characters as one of the contributors to the DC Comics/Kentucky Fried Chicken crossover comics that have been coming out for the last few years at Comic Con.

"I've wanted to see the SuperTeens in the same universe as the Mighty Crusaders for a while now, so I'm happy I got to contribute to this project," longtime Archie Action writer Ian Flynn told ComicBook.com in a statement. "It's definitely a more comedic story, so if you're coming right off the recently completed Mighty Crusaders mini, you can expect more punchlines than punches!"

Unfortunately for Riverdale fans, of all of the Dark Circle superheroes, the Crusaders recruited nearly everyone except The Black Hood, so if you were hoping to see Archie physically beat up on the vigilante who was reinvented as a serial killer for the TV show, you'll have to wait for the sequel. 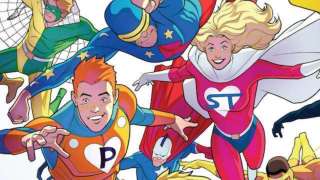 You can see the preview pages in the attached image gallery, and the official solicitation text below.

Riverdale High's new substitute teacher is very odd. Snubbed by the scientific community, he plans his revenge—on the students of Riverdale High! It's going to take a team of people with some mighty powers to stop him. Archie Comics' two most renowned superhero teams are going to meet up for the first time ever in this special mini-series! Features cover 1 of 2 special connecting main covers!

Archie SuperTeens vs. Crusaders #1 is due on the stands on June 20. You can pre-order a copy through your local comic shop before Monday's final order cutoff.

The Last of Us HBO Series Director Reveals Release Window