AfterShock Comics is heading to the future in a brand new series, and we've got your exclusive first look.

The new series is titled Relay, and comes from the minds of Zac Thompson and Donny Cates, with Andy Clarke handling the art. The series takes place in a utopian future that prioritizes uniformity over individuality, with the Relay and its creator Hank Donaldson at the center of everything.

An emissary named Jad Carter works on the Relay discovers the hidden history behind the Relay's creator, and it shatters everything he thought he knew.

ComicBook.com had a chance to sit down with Zac Thompson and discuss the new series, including where Relay originated from.

"The idea for Relay originally comes from a Philip K Dick short story called "Souvenir," Thompson said. "The short story is relatively self-contained but it paints the picture of a larger world that is fit for an epic space opera. So we thought, what would happen if you built off that world? What could you do if you took that story as inspiration and really ran with it a huge conflict. Much in the same way Blade Runner spawned from Do Androids Dream of Electric Sleep this is very much a Philip K Dick world but spun in its own way."

While Phillip K Dick inspired the tone, what the Relay stands for is what prompted Thompson and Cates to move forward with the story.

"The idea of the Relay itself is what intrigues me most about the series," Thompson said. "Honestly thinking of a giant monolith that controls most thought and information isn't that far outside the realm of reason anymore. It's this thing that inspires people to live a certain way, to create a uniform type of existence and compliance across the universe. There's something dangerously modern about that idea. I'm not sure if we'll see it our lifetime but monoculture seems inevitable."

The Galactic Relay is described as a structure that unifies new planets culturally, and Thompson revealed a bit more of what that actually entails.

"The way I explain it to most people is this: it's as if humans were The Borg from Star Trek," Thompson explained. "The Galactic Relay creates cultural unity by controlling what sorts of information are free, it creates law, it creates progress, and it assimilates everything."

"It's not far off from the internet as we know it becoming a sentient presence with its own agency," Thompson said. "Imagine that Google began to dictate the sorts of information we as a society should live by. That's the Relay."

If you compare the job of the Relay to a crazy advanced Google, you can describe the physical Relay as a giant server.

"They exist as towering black Monoliths that reach far above even the tallest skyscrapers," Thompson said. "They reflect rainbow spectrums of light despite being completely black. In many ways, their strange appearance has caused people to interpret it as a religious entity. In truth, it's more of a government tool but this distinction is key." 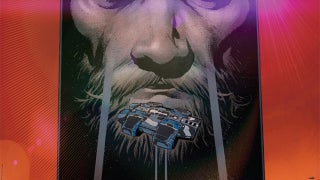 "Several groups have emerged in this world with ideological differences concerning the true nature of the Galactic Relay," Thompson explained. "Yet, all who live under the Relay agree to do so in complete compliance. They don't have a choice. Opposing the Relay is condemning yourself to death."

Fans will navigate this world in the shoes of Jad Carter, who's blind belief in the Relay will quickly come into play.

"Jad is perfect for this story because he's a believer," Thompson said. "As an employee of the Galactic Relay Jad lives for the greater good of keeping order. He's a peacekeeper designed to spread the message of the Relay but he doesn't question the giant Monolith that he works for. That's going to be an issue for him going forward."

"When we start the series we see Jad with a very firm and limited worldview. He sees things in a stark black and white contrast where he not only believes everything the Relay feeds him but he peddles the message of the Relay without fail. He's drinking the kool-aid and he's looking to spread to anyone else who's willing."

That view of the world will quickly come crashing down thanks to Jad's own curiosity.

"We almost immediately see that this is a problem for him because Jad believes in a far-fetched legend about the creation of the Relay," Thompson said. "This belief is what guides all of his actions and he's determined to find the truth and the truth will destroy him."

You'll notice a man's image on the cover, and Thompson explains just who that is and why he's important.

"Well, that man is the Relay's legendary creator Hank Donaldson," Thompson said. "He's the main reason why the Galactic Relay exists and the man Jad is out to find. In many ways Relay is about how we pass down information. How we control narratives is the basic principle of history and eventually after information is passed down so many times the truth gets completely skewed. Legend says Hank Donaldson is still out in the universe but we'll learn pretty quickly that the legend is far from true."

Relay embraces elements of the future but visually goes for something different than your ordinary dystopian world.

"One of the things that Andy and I have set out to do in this series is to show you a future that isn't caked with dirt or riddled with disorder," Thompson said. "The environment is a priority in this world. Green spaces are cherished and metropolitan areas are well designed. Cities are not riddled with crime or violence. This future is utopian but make no mistake, people are still in pain. Andy has gone to incredible detail on every page to show how people exist in this complicated context."

Artist Andy Clarke brought some imaginative elements to Relay's universe, including some inspired weapons and technology.

"Some of the technology we've created really helps flesh out the world," Thompson said. "I don't want to spoil anything but the weapons the Relay employees use are a ton of fun and we did something pretty fantastic with interstellar travel that I don't want to give away just yet."

A project like this allows endless possibilities, but there's one thing in particular that Thompson's enjoyed creating most.

"Honestly, it's building out the philosophical elements of the world, Thompson revealed. "I really love that I'm able to dig into character based work in this series and dwell on how people process something like the Galactic Relay. While we've still got action scenes and plenty of visual splendor, it's the character moments that really do it for me. There are so many questions raised in this series about the nature of reality, government and truth that I feel like we're doing Philip K Dick justice."

As for Relay's future, Thompson teased a big moment coming up in future issues, including one he still can't believe they let him do.

"There's a pretty insane moment at the center of issue three that I can't believe AfterShock let me use," Thompson said. "It's completely bonkers. I honestly can't wait to see how people process the wild shit that happens in those pages. It's experimental, it's weird, it's why I read comics."

"Plus, every issue has something insane in it that completely shifts the direction of the narrative and I don't think I could have done that without working with Donny."

You can find a preview of Relay #1 in the gallery, and you can read the full issue when Relay #1 hits comic stores in July of 2018.