There's more buzz surrounding the character Iron Fist today than ever before. While Iron Fist has been a longtime cult favorite among comics readers, his appearances in other media have been limited (to say the least) until the debut of the new Netflix series. Opinions on the show's first season have been mixed, but there are a lot of viewers and onlookers wondering what made this Marvel Comics character the one chosen to have his own adaptation.

If you're one of those wondering or just looking for a great comics recommendation, then look no further.

There are quite a few good starting points when it comes to understanding Iron Fist, but none of them are better than The Immortal Iron Fist written by Ed Brubaker and Matt Fraction and drawn by a wide array of great artists.

This series began in 2006 cemented Iron Fist as a fixture in modern Marvel Comics and he has regularly been featured in either his own series or a prominent team like the Avengers, ever since. It has also been collected in a single volume perfect for weekend reading.

If you're looking for a great Iron Fist story, here's why The Immortal Iron Fist is the one you need to read.

An Iron Fist for New and Longtime Fans

One of the most difficult challenges in recommending any Marvel comic is finding one that can satisfy both newcomers and readers familiar with the publisher's extensive lore.

Iron Fist was created by Roy Thomas and Gil Kane in 1974, leaving him with more than 40 years of history to explore and be accounted for. It's no easy feat for a new comic to encompass all of that and offer a story that is accessible, but it's something that The Immortal Iron Fist accomplishes with the same grace Danny Rand delivers punches and kicks.

The story is based almost entirely in a new conflict involving Hydra, but it involves all of the most important aspects of Iron Fist's history. The city of K'un L'un, Danny Rand's origin, and his most important allies are all there and play important roles. Fraction and Brubaker designed their series to be a fast-paced adventure that would also guide readers through what makes Iron Fist a great, underrated character at Marvel. So no matter how little or how much experience you have with reading Marvel comics, this one will work for you.

Fraction and artist David Aja are best known for their collaboration on the beloved series Hakweye, but it was in The Immortal Iron Fist that they initially gathered a devoted fanbase.

Aja's action in Hawkeye has been deservedly praised, but what he delivers with one of Marvel's best martial artists is every bit as good. The manner in which every strike from a hand, foot, or knee is delivered carries a kinetic effect. Aja highlights the most brutal action with precisely utilized inset panels.

Aja's accomplishments on The Immortal Iron Fist stand out as being unique within his career too. There's heavier linework and more emphasis on splash pages and wide panels, accompanied by the dense structures that define Hawkeye. The manner in which Aja establishes Iron Fist's underdog role with him facing off against dozens of foes throughout the series is accomplished to stunning effect. 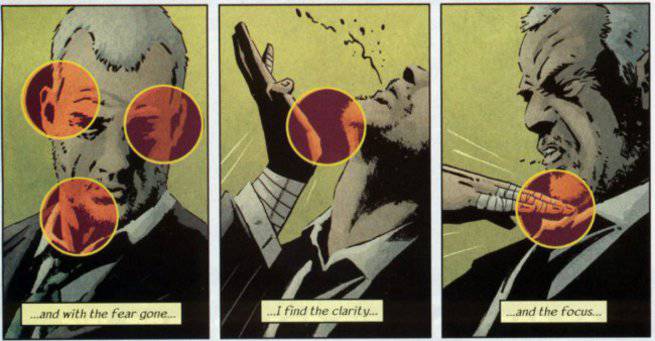 Tales of Past Iron Fists

One of the defining characteristics of The Immortal Iron Fist is how the series didn't just play off the history of Danny Rand, but invented history for the role of the Iron Fist.

It has long been known that there were previous Iron Fists, but Fraction and Brubaker made sure to explore what that meant and why the mantle itself was important. In doing so they made the Iron Fist feel like a more significant part of the Marvel universe and created an opportunity to engage in a variety of short stories.

Throughout the series, and in some one-shots, there are flashbacks to previous Iron Fists who lived throughout the past millennia. The series catalogs their greatest adventures, how some lived, and how some died. This exposes the versatility of the Iron Fist concept, capable of being a soldier, guardian, and leader depending on the demands of the day. Perhaps the most significant addition is that of Orson Randall, a mysterious surviving Iron Fist who Danny encounters and uses the power of Shou-Lao the Undying in very unexpected ways.

A Wide Array of Featured Artists

David Aja drew the largest portion of The Immortal Iron Fist, but he was far from the only artist involved with the series. Travel Foreman, Kano, Howard Chaykin, Mike Allred, and Nick Dragotta are only some of the all-stars who helped to deliver the action and wild settings that make the series a favorite for many Marvel fans.

Their involvement makes perfect sense too. As the series jumped between different characters and timeframes, different artists would come in to depict these changes in the story.

Allred's art is a perfect fit for the annual story of "Orson Randall and the Green Mist of Death". It's a classic pulp riff that plays like a mix of Indiana Jones and Doc Savage. Allred relishes both the fun of this story, but still makes the threat appear haunting. That sort of pairing between artist and material is exhibited throughout the entire series, and it's a delight to see so many artists appear and show off what makes them unique in the world of comics.

We started this list with one of the biggest challenges in recommending comics and that's who we'll end it too. Finding a story that actually contains a beginning, middle, and end can be difficult given the ongoing nature of many superhero comics, but The Immortal Iron Fist pulls it off.

When you reach the end of the series (or at least #16 when Brubaker and Fraction leave) all of the major loose ends are resolved and a satisfying conclusion is discovered.

There's a couple of great cliffhangers for future stories to discover, but it's possible to set down this series and feel like you've read a complete creation. Of course the characters will go on to do more, but they grow and change in a dynamic fashion within this one series and the ending they arrive at feels like it could be enough. So if you're looking to read up on Iron Fist, then start with The Immortal Iron Fist. It's the best buy you'll find featuring a superhero with a dragon tattoo.

5 Reasons Why Fraction & Brubaker's Iron Fist is the Best