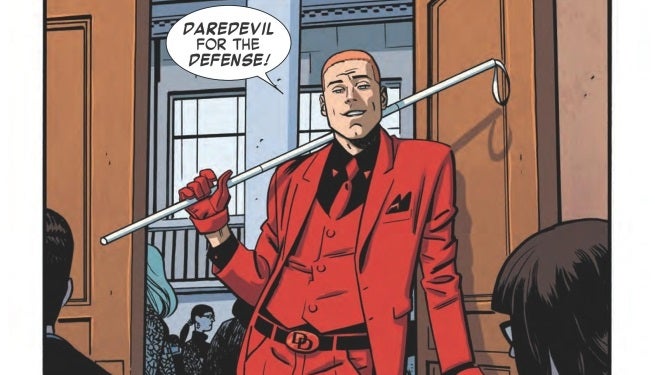 Marvel Comics has released preview of next week's Daredevil #14, by Mark Waid and Chris Samnee, and it reveals Matt Murdock's ostentatious new look.

Matt walks into court with a cocky demeanor, new haircut, and striking red three piece suit, completed by a belt buckle emblazoned with his Daredevil insignia. It seems that, with his secret identity now public knowledge, Matt has decided to let loose. Will he ditch the old Daredevil mask entirely? When reached for comment Marvel simply replied, "Keep reading."

The solicitation text suggests that Matt's new look and attitude are the result of him gazing back at the demons of his past, and his friends – Foggy and Kirsten – are not fans.

Check out the solicitation text and the full preview below. Daredevil #14 goes on sale March 25.

• Writing his own life story has inadvertently forced Matt Murdock to face his darkest demons - and it's changing him.
• Kirsten and Foggy don't like the man Daredevil is becoming--and neither do the San Francisco police!
Rated T+