"In over 30 years of producing comic books, I've never seen anything like this. I've never had three books completely sell out before fans get a chance to experience them! The fan reaction to Major X has been nothing short of the most overwhelming experience in my career. They inundate me with their enjoyment and enthusiasm of the book and the new characters. I've never seen so many fan sketches as I have for Major X. I am humbled and inspired by this reception. I promise you, with three issues left, the best is yet to come. The work on issue #3 by my long time friend and peer, Whilce Portacio, underscores the excitement we are all having bring Major X to you! We are celebrating by giving you brand new covers on our additional printings! "

Marvel announced the news that #2 had sold out early this month, making it the second consecutive issue of the series to do so. To goose reorders, Liefeld will draw a cover exclusively for the second printing of the issue. The same will happen for Major X #3. Though Major X is just hitting comic shelves now, it's an idea Liefeld has had for nearly 30 years. After a wait long enough to make anyone anxious, Marvel finally gave Liefeld a six-issue mini-series for the character, which is being released twice-monthly over the course of the next three months. The first issue has garnered generally positive reviews, with critics making sure to point out it is peak-Liefeld. 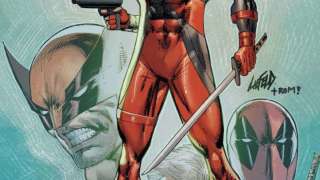 is a '90s X-Men fan's dream, plain and simple," ComicBook.com's Matt Mueller said in his review. "Thanks to time travel, we get a pitch-perfect take on Cable, Domino, Wolverine, Deadpool, and more that will have your nostalgia alarms going off in more ways than one, but there is more to the story than just a walk down memory lane."

Major X comes from a place called the X-istence, a universe that sort of runs parallel to ours. It still seems tied to our timeline, however, since Major X ends up having to leave his home (alongside their version of Hank McCoy) to save their world after it is overrun by a mysterious enemy. They end up overshooting though and are thrown into our universe and timeline, somewhere in the 1990s. That puts Major X into conflict with Cable, Domino, Cannonball, and eventually Wolverine and Deadpool, as well as a mysterious assailant known as Dreadpool with Cable-like shoulder pads. Eventually, they manage to get rid of Dreadpool and Cable tells Major X to reveal himself, though after he shares his story Cable thinks he knows who he is. Major X reveals himself to be Alexander Nathaniel Summers, Cable's son and tells Cable he has risked everything by contacting him at this point in his history.

Major X #3 (of 6) will be available in comic shops and on digital platforms like ComiXology and Nook on May 1.

In this latest episode, we go all in on Avengers:Endgame! This is the spoiler filled discussion you've been waiting for after coming out of the movie and we cover a ton of ground. Make sure to subscribe now and never miss an episode!

'Major X' #3 Sells Out Ahead of Publication Date