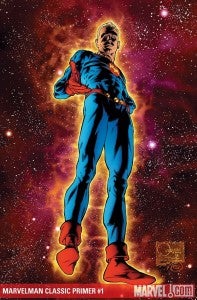 While it's been years now since Marvel Comics acquired the rights to Marvelman/Miracleman, progress has been slow in actually making any new comics featuring the beloved character. But just over six months after the publisher filed trademark and copyright paperwork indicating that they officially owned the character, Editor-in-Chief Axel Alonso suggests that an announcement is imminent. "There has been progress. Considerable progress. And we'll be making an announcement soon," Alonso told Newsarama. "I'm a huge fan of Marvelman. I'm very excited about seeing him being published by Marvel." If that sounds familiar, there's good reason. People associated with Marvel and Marvelman have been playing  fans and the press variations on that theme since Marvel first acquired the character in 2009. "On another note, attended a cool Marvelman meeting today where Neil Gaiman told us how his last 2 unfinished storylines will end," Marvel's Tom Brevoort tweeted back in 2010. But this time the sense of urgency and excitement is perhaps there because so many fans have speculated that we'll see Marvelman appear at the end of Age of Ultron, which features Angela. Angela, of course, is a character with almost as complicated a legal history as Miracleman--and one who is also closely associated with writer Neil Gaiman, who co-created her with Todd McFarlane and then spent a decade in a legal fight with McFarlane trying to get what he was due for the job. Gaiman also wrote Miracleman after Alan Moore left, and didn't get to finish his run before the previous intellectual property owner went belly-up. Miracleman, ironically, is what the character had to be called after Marvelman was imported to the United States. DC's Captain Marvel and Marvel Comics were both concerned about brand confusion at the time. "Wait six months" was what artist Mark Buckingham, who would likely have to take time off from his best-selling work on Fables to make a Marvelman series happen, told fans at FablesCon when they asked whether he and Gaiman would be working together on the character again.