Wolverine is back, and Marvel Comics is celebrating with a series of variant covers by Steve McNiven.

The variants reimagine the main cover for Return of Wolverine #1 with alternative costumes for Logan, including his classic brown and tan costume and his look from the Age of Apocalypse.

You can see the variants in the attached gallery.

Return of Wolverine will complete Charles Soule's trilogy of Wolverine events that began in 2014 with Death of Wolverine and that continues currently in Hunt for Wolverine. 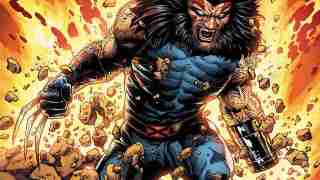 Return of Wolverine promises to unveil the answers to the mystery currently being investigated in the four Hunt for Wolverine miniseries -- Adamantium Agenda, Weapon Lost, Mystery in Madripoor, and Claws of a Killer.

This includes revealing that Wolverine has a brand new superpower, the ability to heat up his adamantium claws.

"Wolverine's body has been missing. The entire Marvel Universe has been looking for him because he's a very important part of the Super Hero puzzle. And at long last, he will be found," Soule tells Marvel.com. "I thought this was a real opportunity to do things that would make him feel new and fresh in a way; if you come back from the dead, it should mean something. One of the outwardly physical manifestations of that is that now, from time to time, his claws—once they're popped—they can heat up. They can get really hot.

"The way I think of it in my head and the way I've described it in scripts to Steve is you've got a blacksmith who is working with metal on his or her anvil and it can be red hot, yellow hot, white hot, all of that stuff and Logan can do that now. If Logan comes at you and his claws are heated up and blazing you're in big trouble."

The investigations will conclude in the one-shot Hunt for Wolverine: Dead Ends.

"The four Hunt For Wolverine miniseries all follow different threads in pursuit of our pointy-fisted friend, and each comes to a conclusion with different pieces of the puzzle," teased Marvel's X-Men editor Jordan D. White when Dead Ends was announced. "With Dead Ends, the players assemble to bring those puzzle together and see what they learned…but they might not like what they find."

"I'm really looking forward to seeing how fans start to put the pieces together," continued Soule. "There's a big payoff coming down the road, and all the interlocking parts of The Hunt for Wolverine build to it. The more you read, the more clues you get. It's really fun--especially since I have a bit of a reputation in X-continuity for knocking off beloved mutants. This time, it's nice to be part of bringing someone back!"