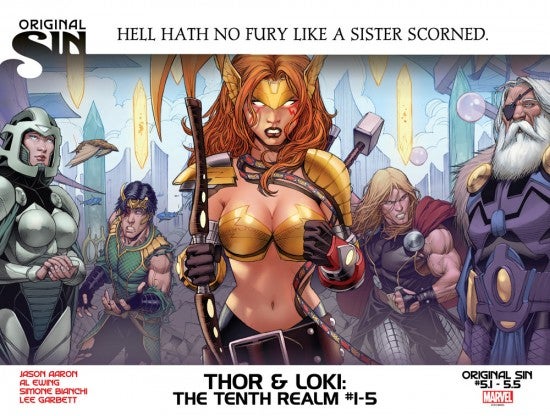 As reported last weekend from the Chicago Comics and Entertainment Expo (C2E2), Marvel Comics will shake up the Asgardian status quo in a big way this summer by revealing that Odin has been livin with a pair of huge secrets for as long as anybody can remember. First of all, Thor and Loki have a sister -- Angela, recently acquired from writer Neil Gaiman and originally created to appear in the pages of Spawn. It's her mission of revenge that brought her into the Marvel Universe in a big way, and has fueled everything she's done since apppearing at the end of the Age of Ultron event. "Al Ewing and Jason Aaron have crafted a truly epic story here, brilliantly brought to life by Simone Bianchi and Lee Garbett," said Marvel Editor Wil Moss. "It's got everything: Thor and Loki fighting side-by-side! The return of Odin! An ethical quandary that stumps even Loki! An insanely awesome fight between Thor and Angela! And so, so much more. The creative team is really giving this story their all, leading to huge ramifications in the Thor: God of Thunder and Loki: Agent of Asgard series when all is said and done. And just wait till you see where Angela goes from here…" The big reveal ties into Marvel's Original Sin event, which also rocks the foundation of Asgard with the revelation that the Nine Realms discussed up until now are not all there is to the universe. In fact, there is a tenth, which is the subject of both much of Angela's rage and of  a game-changing 5-issue limited series. Here's the synopsis from Marvel, followed by solicitation text: Though not of his blood, Odin raised Loki as if he were his own. Alongside his biological son Thor, the two would grow into gods that would shape the very fabric of the universe for generations to come. But Odin had a secret. A daughter unknown until now, and the mystery of her arrival will unlock the secret behind the banishment of an entire realm! Now, the long forgotten Tenth Realm has returned, and with it comes Angela – the lost daughter of Asgard! And her quest for revenge will cut a bloody swath through Asgard like no other! Jason Aaron, Al Ewing, Simone Bianchi, and Lee Garbet are set to take Thor and Loki on an emotional roller coaster, as the sins of their father will be visited upon his children. And the coming of Angela and her kingdom could spell the end for all of Asgard! What is the secret of the Tenth Realm's banishment? As Thor & Loki uncover the mystery, they'll find themselves on a deadly collision course with an even deadlier sister! The sins of Asgard stand revealed and the stage is set for a climactic clash of gods and angels this July in THOR & LOKI: THE TENTH REALM #1! THOR & LOKI: THE TENTH REALM #1 (of 5) Written by JASON AARON & AL EWING Art by SIMONE BIANCHI & LEE GARBETT Cover by DALE KEOWN On-Sale This July!