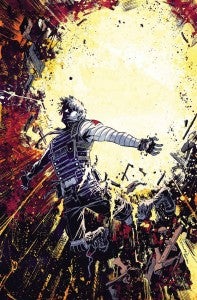 Even though Captain America: The Winter Soldier is hitting theaters in 2014 and there was no indication in Marvel Comics's June solicitations that the series was coming to an end, today's July solicitations do not list a new issue of Winter Soldier, the comic that follows the adventures of Captain America's former sidekick Bucky Barnes. Marvel Comics confirmed for ComicBook.com that the series will end with June's Winter Soldier #19. "I won't lie, after spending the last 9 months or so living in Bucky Barnes's skin, I'm a little heart broken," said series writer Jason Latour on his blog. "He's grown to be a very special character to me, maybe my favorite Marvel character ever, and I felt I could've written his story for years. The opportunity to do so came at a very trying time in my life and really helped me through some tough stuff, so in it's way it's very personal work. I hope that shows." He added, "There are macro-scale factors involved in decisions like this that sometimes have nothing to do with what's actually going on in the book. I was never under any illusion that this gig wouldn't be an uphill battle in every regard. Nic and I had some tremendous shoes to fill and we both knew we were up against it from the start. But it was a challenge we welcomed, and even with this news I consider what we've done to be a real success. I'm thrilled that the bulk of the people who've stuck around or have tried the book in our run seem to have enjoyed our story as much as we've enjoyed telling it. My hope is that the next two issues give y'all the big explosive send off Bucky's first series deserves and that I'll be playing in his muddy little sandbox again. Hopefully much sooner than later." The news comes just days after production officially began on Captain America: The Winter Soldier, and the first concept art featuring Barnes as the Winter Soldier appeared online. While there's certainly no guarantee, and the book hasn't sold quite as well since creator Ed Brubaker left Marvel, it seems likely the character will get a new #1 as part of the second wave of Marvel NOW! titles that begins in July.