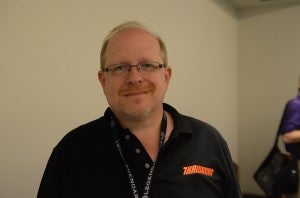 Let me preface this by saying that Mark Waid is a grown man who can take care of himself, and a good deal more influential than I am, so there's really no need for me to defend his right to his opinion. That said, Man of Steel has proven to be one of the most divisive films ever in the comics community, and there is some real animus coming from both sides, making conversations about the film ugly and serious discussions nearly impossible. Waid is at the center of it, having been the first major comics industry figure to write a bad review of the film, and so there's been a great deal of venom directed at him by fans of the film on social media. 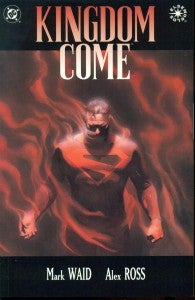 We'll also get this out of the way, because it's a distraction from real issues, but one I've seen people discussing a lot: I don't know Waid personally, and am only familiar with his Internet persona, which is (as is yours or mine) probably not entirely indicative of his personality. That said, I'm reasonably certain that he didn't actually stand up and shout anything in a movie theater, even if his own account is that he "said in a very loud voice" that he wanted to leave the movie. In a comments thread on Facebook, a guest who accompanied him to the movie said as much, claiming that he said it only to her. It's also worth noting that his review is called "Man of Steel, since you asked." That's a literal thing; Waid had been asked by many, many people on social media whether he would review the film. Works like Kingdom Come and Superman: Birthright had helped to shape a generation's take on the character--and elements of some of Waid's work had even been adapted into the film. It's not surprising that fans wanted to know, both before and after the movie was in theaters, what he thought about it. Spoilers ahead for Man of Steel. I avoided it as long as I could without being a distraction to the argument. The writer also offered a pretty even-handed critique, effectively arguing that 2/3 of the film was great and that even one of the two most controversial scenes in the movie worked for him, much to the credit of screenwriter David S. Goyer. I may not agree with the totality of his review, and I don't agree with his conclusion, but his approach to writing a critique was a legitimate and thoughtful one. 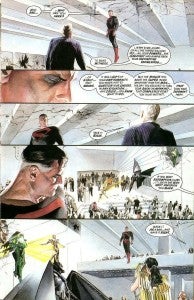 What he essentially said was that a particular scene in the film was a dealbreaker for him, and that once it had happened there was no going back. That may seem to some like it's an unreasonable position to take, except that Kingdom Come--the story that most fans would consider more defining of "Mark Waid's Superman" than any other--was almost completely premised around the notion that Superman does not kill. In the book, Superman didn't even kill The Joker, a mass-murderer who had, moments before, killed Lois Lane. That best-selling, award-winning, adaption-inspiring work is a touchstone in Waid's career and presumably in his life, and the idea that he should just be able to overlook something that flies in the face of it is a bit silly. Man of Steel will make $200 million faster than a speeding bullet, and that means millions of people, many of whom haven't read a comic before or at least haven't read one in years, will see this as Superman. Waid's relationship with Superman goes back decades and seeing the character abruptly and dramatically redefined can't be comfortable. Hell, how many of you readers have spent nearly two years complaining that he's not wearing red trunks anymore? Don't say none, because I read the comments threads of our stories. If you really think that two years holding a grudge about Superman's wardrobe is more reasonable than two days nursing frustration about his moral code, you've missed the point of Superman. I am, of course, not guiltless in this. Waid has never been secretive about the fact that he doesn't particularly care for the John Byrne era of Superman comics. That era--which outlived Byrne's involvement and basically went from the Crisis on Infinite Earths until 1999 or so--informed the film significantly, with a lot of Krypton's underlying personality defined by Byrne's The Man of Steel as much as, or more than, Waid or even Siegel and Shuster. It's during that era that a storyline took place that mirrored the Man of Steel scene that so upset Waid. That, combined with his general frustration with DC Comics in the recent past, caused me to respond, when I first heard he was tweeting out negative thoughts about the film, "Well, what did anyone expect?" I also became frustrated with a number of fans and professionals who spent the first day of release retweeting Waid relentlessly or spouting off his thoughts in arguments on social media as though they were their own. And as conversations escalated, I wasn't always nice toward either other fans or even Waid ("He's just mad because it's not Mark Waid's Superman" came out of my keyboard, which is reductive and I'm not proud of it)--which is part of what made me want to write this. It seems to me, frankly, that people are just...mean about movies now. Somehow expressing a dissenting opinion on a major motion picture has become high treason. I noticed it with The Dark Knight Rises and Iron Man 3, as well--those who had problems with the film would openly attack those who had the audacity to enjoy themselves at the movie theaters and, in turn, fans of those movies would take cheap shots at anyone who said it was less than perfect. As often as not, much of the bickering took the form of silly old Marvel/DC sniping, which masked the real issue. I think maybe the massive promotional run-up to these movies gets people so emotionally invested before the film is ever released that they can't deal with it if others don't feel the same way they do. I mean, we've all had months to establish not just expectaitons but a kind of relationship with Man of Steel or Iron Man 3. It didn't used to be like that, and now I wonder whether some people just can't disconnect from the event for long enough to have a serious, thoughtful conversation about the content. This isn't just about the pro-Man of Steel people (of which I'm one) taking aim at Waid and other opponents of the film, either. I feel like there's a real pathology involved. I feel that pang of discomfort when somebody really passionately and aggressively advocates for something I don't agree with. It's natural and visceral. It's up to you, though, to overcome basic, animal instincts and not to lash out and act in an uncivilized way about it. Threatening to punch Mark Waid on Twitter isn't going to make him or anybody else change their mind about a movie you like, and calling people who enjoyed the movie testosterone-addled thugs because they don't object to a Superman who can use lethal force in a desperate situation is as silly as it is mean-spirited.

A Man of Steel Fan In Defense of Mark Waid