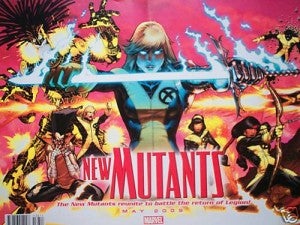 With the release of The Avengers looming, there's been a lot of speculation regarding what Marvel characters will be the next to get their own feature film, with guesses ranging from Nick Fury and S.H.I.E.L.D. to the Guardians of the Galaxy--but few have thought to speculate about what Fox, who own the rights to the X-Men, Fantastic Four and Daredevil franchises, might do to expand their reach in the area of the superhero tentpole film. According to an interview with Collider, Fox CEO Tom Rothman appears eager to expand the X-Men movie universe sooner rather than later, and he's not naming names--but it's close. According to the report accompanying his quotes, Collider says that Rothman "all but confirmed that a New Mutants movie will be announced soon." First appearing back in the early '80s, New Mutants is something of an obvious property for the studio to pursue given the success of X-Men: First Class; it's basically just the next, more racially diverse, generation of kids at Xavier's School. For the uninitiated, think of it as the missing link between the X-Men and Generation X, but far more trademark-friendly than a title like Generation X could ever hope to be. The original title eventually morphed into X-Force, with a more "edgy" take, but has come back a couple of times since then. And even the New Mutants themselves notwithstanding, the X-Men universe has proven to be fertile ground for expansion in the Marvel Comics for years; one supposes that the X-Men contract probably entitles Fox to do films based on subordinate franchises like X-Force and X-Factor, as well as ancillary concepts like the Age of Apocalypse. As Collider points out, failing to at least attempt an expansion would be doing a disservice to the properties it maintains as well as the stockholders, in this age wall-to-wall superhero success stories.

A New Mutants Movie May Be Closer Than You Think