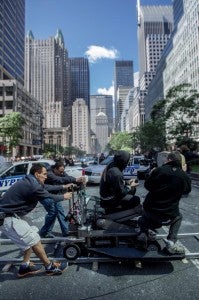 Director Marc Webb has just released the first "official" set photo from The Amazing Spider-Man 2's epic showdown between Spider-Man, the New York Police Department and The Rhino, hours after a number of paparazzi and fan-shot photos hit the Web. Titled simply "Park Avenue Showdown," the photo at left doesn't give a lot of details, staying mainly on the police officers taking shots from behind their cars. A film shoot for the spider-sequel took place yesterday at Park Ave. and 52nd St., involving property damage, a shoot-out, what looks to be a pre-visual effects version of the Rhino suit...and a small child dressed in a Spider-Man costume.