A casting notice for extras has gone out on the official website for the Bard Fortress, the 19th Century Italian building where some shooting is expected to take place for The Avengers: Age of Ultron, asking for people to come out and participate in Marvel's After Party. They're looking for both kids and adults, but apparently it won't be too big a crowd scene (a la Batman vs. Superman's football sequence), because it sounds as though they're going to be at least somewhat selective. Apparently confirming that "After Party" is indeed the production's cover name, here's what the casting call has to say (which is pretty much nothing about the film itself, but if you find yourself in Italy soon, it may be worth cruising by...): 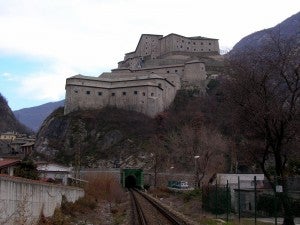 The production of the film After Party - The Avengers announces that the first dates of casting for the selection of the extras will be held at the Forte di Bard in the days of Thursday 13 , Friday 14 and Saturday, February 15, 2014 . It will be possible to present in either one of these days in the time range between 9.30 and 18.30 . Reservations are not necessary before, or by phone or by email. RULES 'OF PARTICIPATION We are looking for people aged between 23 and 70 years residing in the Valle d' Aosta. Wanted In addition, some minors, under 14 years of age, who must be accompanied by at least one parent . Candidates are advised to bring : - A photocopy of identity card valid - Tax Code - Iban sheet with staff For foreigners it is also necessary to come up with : - A photocopy of the residence permit valid ( at least until the month of April 2014 ) - A photocopy of the passport Candidates will be selected directly from the director and the production effort , regularly paid , will be one or more days depending on the needs of the production and availability of candidates, to be specified in the casting . Communications to the people you select will be made ​​directly by the employees of the production. For contacts : vdacasting2014@gmail.com

Avengers: Age of Ultron Casting Call For Extras Goes Out in Italy