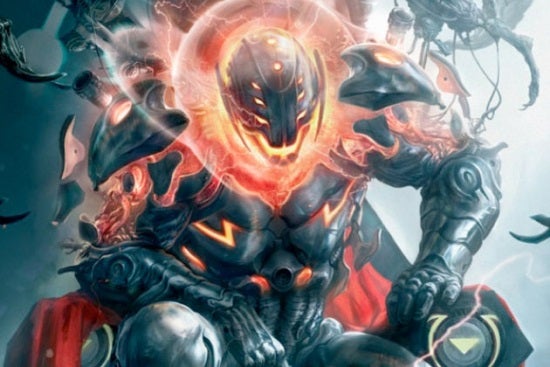 Filming is just beginning in England on Avengers: Age of Ultron. The film brings in a host of new villains, including Baron Wolfgang von Strucker, Quicksilver and the Scarlet Witch, but director Joss Whedon says that every character has a purpose. "I fiercely dislike the idea of just throwing in more people for the sake of doing that," Whedon told Empire Magazine. "But last time I had all of Earth's Mightiest Heroes versus one British character actor, and I needed more conflict." It's a little funny to hear Whedon say that he needs more conflict compared to Avengers, considering how the film significantly altered the Marvel Cinematic Universe for Phase 2 and has been a touchstone for almost every Marvel Film since. Of course, there's also the film's titular antagonist, Ultron. Whedon says he's having a lot of fun with that villain. "I'm having a blast with Ultron," Whedon said. "He's not a creature of logic - he's a robot who's genuinely disturbed. We're finding out what makes him menacing and at the same time endearing and funny and strange and unexpected, and everything a robot never is." Sounds like a pretty different approach to the typical robot-villain archetype. In Avengers: Age of Ultron, the Avengers reassemble to battle the sentient robot known as Ultron. Avengers: Age of Ultron comes to theaters May 1, 2015.