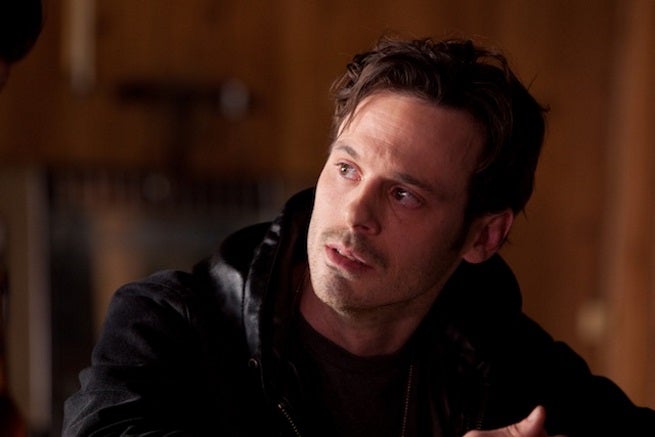 With Batman V Superman: Dawn of Justice filming in the streets of Detroit for part of this week, a number of potentially-revealing set photos leaked out, including a look at Superman's new (or at least not color-corrected) costume and first looks at Scoot McNairy with greenscreen socks on both legs and Tao Okamoto as her as-yet-unnamed character (rumored to be Mercy Graves, Lex Luthor's assistant and bodyguard).

It was McNairy who generated the most buzz, though, with some fans immediately looking to name him as the big-screen version of The Flash on the grounds that those green screen booties could be used to simulate speed effects from the knees down.

I don't buy it, and not just because he was wearing a shirt, tie and slacks at the time of the photos. He doesn't fit the physical model Snyder seems to be going for when casting Batman, Superman, Wonder Woman -- even Cyborg and Aquaman. And, yes, as with the upcoming TV series part of that could be that The Flash is a fast guy and so should be thin and aerodynamic -- a look that McNairy fits well -- he just doesn't look superheroic enough. Everyone cast so far as a major DC superhero has franchise lead potential and, in the case of Affleck, Gadot and Momoa, that potential has already been realized in at least one major franchise each.

All that said, with his comments that he hopes to be a longer-term part of the DC Universe, it does seem worth considering who McNairy might be playing, in the context of DC superheroes and -villains.

Who do I think is a more likely choice than The Flash? Well, let's start with a reader suggestion I thought was particularly clever:

@russburlingame just a theory, what if Scoot McNairy is Doctor Will Magnus pic.twitter.com/Ak6u5ZA96i

In the comics, at least, there's nothing to explain the green screen legs...but there are other things that sync up nicely.

The fact that McNairy has been seen on the set of Batman V Superman at the same time as other characters that are tied to LexCorp might be key, as it wouldn't be surprising to see Lex work with some of the government's top experts in areas like military hardware, cybernetics and genetic engineering, as he's periodically done in the comics (this is part of his New 52 backstory, which is presumably what will be used as the primary source material for the new movies).

The same reader who tweeted at us with the idea, also noted that some rumors have placed McNairy's character as being key to the same part of the story that features Vic Stone, the high school football standout who will eventually become Cyborg. Magnus, a robotics expert, could easily fit that bill.

On top of all that, we have the fact that Magnus is tied to the Metal Man -- a team which has had a movie in development for some time. So long, in fact, that until it was recently referenced in a story at The Wall Street Journal, many fans had started to assume that it had fallen into development hell and wasn't going to happen! 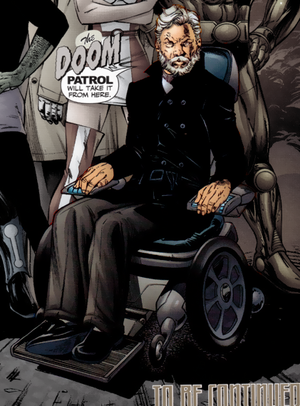 So McNairy might not look quite as much like "The Chief" as he does Will Magnus, but most of the rest of the stuff -- being a specialized expert who might work with Luthor, etc.) fits, and it would explain why they would want either amputated or altered legs.

Yes, in the comics, Caulder is just in a wheelchair...but some have speculated that whatever is going on with McNairy's character, he might have lost his legs during the Battle for Metropolis.

If so, it would give him a reason to work against Superman as well as making the amputation differentiate him a bit further from Professor Charles Xavier, on the off chance a Doom Patrol movie were ever to actually happen.

They could even dip a bit into the well of angst provided by a post-"Death of Superman" story from the '90s that depicted a man in a wheelchair who blamed Superman for his plight because he hadn't saved him from the fallout of the battle with Doomsday.

While Superman hasn't even died yet, and the Cyborg Superman's origins are wildly different in the New 52, who's to say they won't want to use Henshaw in some capacity?

He's a big part of one of the most widely-read Superman stories in decades, and they've already reinvented him somewhat in Smallville Season Eleven. Certainly having him on board as just a generic "expert" on something and teasing the possibility of more down the line wouldn't be out of line...and he's got both cybernetics connections (later in life) and a general hatred for Superman (earlier).

There are at least a couple of characters who have reportedly been created just for the movie, and we had one of them in Man of Steel as well in the form of Jenny "Olsen" Jurwich.

With the movie's Lex Luthor drawing frequent comparisons to Steve Jobs, after all, where's his Bill Gates? His John Lasseter?