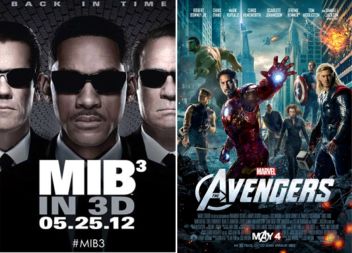 The only thing that stands between The Avenger making a clean sweep and winning every box office weekend in May is Will Smith and a little film called the Men In Black 3. Other big budget movies like Dark Shadows and Battleship haven't even come close to toppling The Avengers, but Men In Black 3 has a legitimate shot. The reviews on Men In Black 3 have been somewhat mixed, but in general they seem to be trending positive. While short of the rave reviews given to The Avengers, Men In Black 3 seems like it is a fun and enjoyable enough movie that families will turn out to see it. Will Smith has also been out of the summer blockbuster spotlight for awhile, and his large fan base is likely anxious to see him in a new big budget movie. Since it's a three-day holiday weekend, the Men In Black 3 could score big with an $80 to $100 million box office. It's also possible that the movie will fall short and land in the $60 million range. Either way, Men In Black 3 will likely have enough steam to finally knock The Avengers from it's perch. It's interesting to note that Men In Black is originally based on a comic book series. Sometimes it takes a comic book movie to beat another comic book movie. Even though Men In Black 3 will likely make it's way into the top spot, no tears should be shed for The Avengers. With most kids now out of school and a holiday weekend, the few remaining people who haven't seen The Avengers will likely finally make it to the theaters. Combine these new viewers with repeat viewers and The Avengers could be looking at another $40 to $60 million in its fourth weekend at the box office.