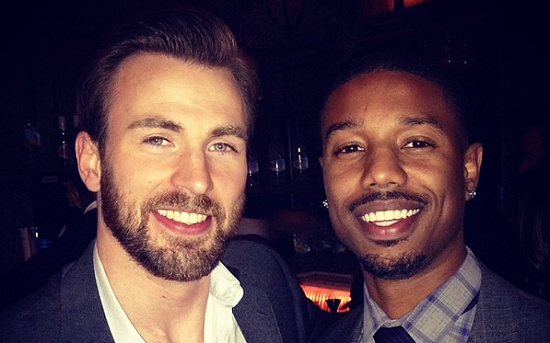 Incoming Human Torch Michael B. Jordan just posted a photo to his Instagram account indicating that Captain America: The Winter Soldier star and former Human Torch Chris Evans had "passed the torch" to the young actor, and giving fans a glimpse of the two actors spending time together as Evans ramps up his last week of publicity for the upcoming Captain America  sequel and Jordan prepares to start shooting Josh Trank's Fantastic Four. "The Torch has been passed! #FlameOn," read the caption. Jordan's appointment to the role of Johnny Storm, the Human Torch has been a controversial decision among hardcore fans, many of whom are upset either that Storm isn't being depicted as white (he traditionally has been in the comics and other media) or that he and his sister Sue (played by Kate Mara) will not be the same race. Jordan has been dismissive of these concerns, saying essentially that it's 2014 and if a director wants to cast the actor he thinks will do the role best, fans shouldn't get upset about that actor's skin color. Fantastic Four is also expected to star Miles Teller as Reed Richards/Mr. Fantastic and Jamie Bell as Ben Grimm/The Thing. None of the casting decisions have been particularly popular with fans, and the film itself is rumored to be having some pre-production speed bumps as 20th Century Fox isn't happy with it, but can't make changes since they have only six months to get something in front of cameras, or they'll lose the rights (which revert back to Marvel after a period of inactivity).