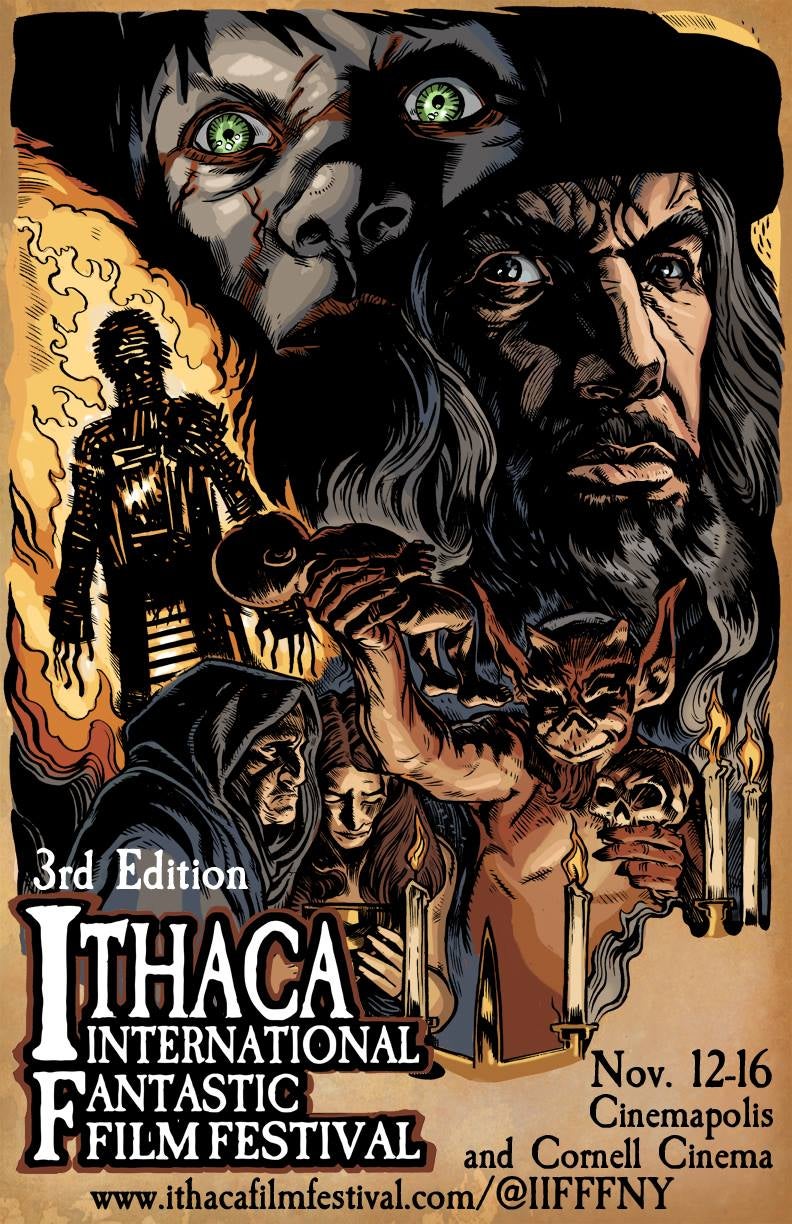 You can see a formal announcement letter from organizers below. The convention takes place next weekend.

Three years ago we had the crazy idea of bringing a Fantastic Film Festival to Ithaca. Present-ing that first edition remains one of our favorite memories; getting positive feedback on that year's selection of 18 movies has pushed us to grow our efforts as we continue to be better, present bigger, and dig broader into the genre. And now, three years later, we have a robust selection of 30 movies and an ever-expanding 5-day festival! This year the team was set on expanding the festival not only in terms of films, but also music and art. We still have our core international competition, retrospective, mini-series, documentaries and special screenings, but are also working with the Johnson Museum of Art, Ithaca Underground, and renown comic artist Steve Ellis to bring to you more Fantastic events than ever!For the past year we've been working with the Johnson Museum of Art and their exhibition on Surrealism and Magic. The results? A retrospective on Witchcraft in Popular Imagination screening at Cornell Cinema and featuring classics like Halperin's seminal zombie film, White Zombie; Friedkin's popular classic, The Exorcist; and Hardy's disturbing cult hit, The Wicker Man. The highlight of this retrospective, though, is a cinema-concert held in Sage Chapel on Friday, November 14: Häxan: Witchcraft Through the Ages with an original score from the Brooklyn-based new music collective, Transit. Don't forget to make time to go see the amaz- ing exhibit at the Johnson Museum of Art where you'll learn everything you ever wanted to know (or didn't want to know!) about witchcraft's influence on surrealism.
This year we will also inaugurate a Fantastic Art Show on the Ithaca Commons! Located next door to the Movie Poster Store, award-winning illustrator Steve Ellis has brought a murderer's row of amazing artists to showcase their art in a gallery exhibition over the weekend. Take a break from the movies and swing by the gallery to chat with the artists and get a glimpse of their amazing work. The full line-up is detailed in the next pages of the booklet. We couldn't be more excited to welcome so many amazing artists to this new addition to the festival. This year's line-up includes:

From its inception, the IIFFF has sought to embrace not only films, but also music and art, and for the past two years we have worked with other venues to program concerts. For our 3rd edition we proudly team up with IthacaUnderground and CSMA to offer a full program of concerts from Thursday to Sunday! Bubba Crumrine, programmer for Ithaca Underground, has put together a fantastic line-up including bands like 100% Black, What Moon Things, and Last Dot! And our closing party will be held at CSMA for a night of concerts to officially – and fantastically - wrap-up the third edition in the best possible way!