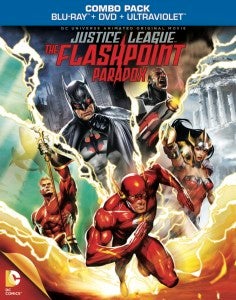 A number of the notable Warner Bros./DC Entertainment names associated with the recently-released direct-to-video film Justice League: The Flashpoint Paradox agree on at least one thing: The film should be used as a guide for how to handle the character of The Flash going forward. That's one of the things they talked about in the commentary track for the film, which included the film's director Jay Oliva along with screenwriter Jim Krieg, producer James Tucker and DC Entertainment's Chief Creative Officer Geoff Johns. And, of course, while some of those people likely didn't have any clue that a TV series based on The Flash was in the works for 2014, it seems likely some of them would. "One of the things that I told my team was that...it's very Flash-centric and one of the things at home video, we tend to not get Flash-centric movies. It's mostly Batman and Superman just because they sell well. So one of the things I told my team was, if they ever do a live-action Flash film, let's show them how to do it," Oliva said. "We can do something where Flash is the centerpiece but still do this incredible action and incredible drama and play that up--if they ever do a live action film, I think this is a good template to do it with." Added another voice--either Geoff Johns or possibly Flashpoint screenwriter Jim Krieg, "The last five minutes of this--that is what you show every director who would ever tackle The Flash. It's unbelievable." Someone else might be able to listen and say with certainty whether it was Johns--who will write the three Arrow episodes that introduce Barry Allen and reportedly the Flash TV pilot as well---or Krieg who addressed that last bit; my ears aren't quite good enough to tell them apart because the other participants are all kind of speaking at a low hum in the background, the enthusiasm for the sentiment running high. It's interesting, though, because prior to saying this, the group discussed the thought that went into building his speed effects and the way that Flash's powers were handled. That's something that The CW's Mark Pedowitz told reporters at the network's upfront presentation was still being worked out, as they feel a fresh take on speed powers rather than the standard "blur effect" is important to the success of a series where that's the hero's main power.

Could the Flash TV Series Take Cues From Justice League: The Flashpoint Paradox?