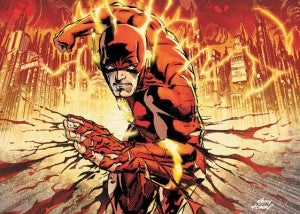 Will this lead to controversial costume changes in future direct-to-video movies? Perennial Batman voice actor Kevin Conroy surprised an audience at Nerdists' popular video podcast Comic Book Club with an announcement that he will star as the Dark Knight again in Flashpoint, an animated film adaptation of last year's status quo-shattering adventure by Geoff Johns and Andy Kubert which set the stage for DC's bestselling and controversial New 52 relaunch. The actor didn't appear to know that the film was thus far unannounced, or even what it really was beyond his own part. "It's more about the Flash but Batman is in it," he explained before stammering his way through the title. Though the film had not yet been announced to fans, it is apparently going to be coming as fast as...well, you know. Conroy said that he had recorded his part for the movie the night before, implying that he was already finished with the piece.