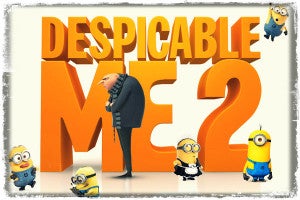 Why is Despicable Me 2 dominating the box office? Does it tell a story that's more compelling than any of the other various animated movies? Are the stars doing the voice work bigger than the stars in other animated movies? The answer is "no" to both of those questions. The plot line in Despicable Me 2 is no more interesting than in any other animated movie, and the cast names are no more or less recognizable. The plot of Despicable Me 2 is pretty standard fair. There's the central character Gru, who is a little unique in the fact that he used to be a villain. However, in Despicable Me 2, he's fully into the hero role. The central plot revolves around Gru's attempt to track down a mystery villain, while finding love along the way. Where Despicable Me 2 rises above the standard animated fair is that the jokes work with both children and adults. While a lot of animated movies seem to be focused on just making kid's laugh, Despicable Me 2 has jokes that span the ages. Despicable Me 2 is as funny and probably more funny than most of this summer's live action comedies. I found myself laughing out loud more times during Despicable Me 2 than I did in either The Hangover Part III or The Internship. Of course, being funnier than either of those two movies is probably not saying much, but trust me, Despicable Me 2 is a funny movie. While Steve Carell might not be a bigger name than the stars associated with various other animated movies, he does appear to have found his perfect animated role in the form of Gru, the lovable villain turned hero. Even though Carell might still be best known for playing Michael Scott on The Office, Gru is his franchise movie role. The heart of Despicable Me 2 is the interaction between Gru and his three adopted daughters. From the fairy princess who cancels out on a birthday party at the last moment to Gru's eldest daughter going on her first date, it's those moments that tend to strike a chord with the parents in the audience and have them laughing right along with their kids. The Minions also play a larger role in Despicable Me 2 than in the first film, as they are being prepped for their own spinoff movie to be released in 2014. Minion humor is more slapstick and sight gags, but surprisingly it works rather well in Despicable Me 2. The Minions also appear custom made to show-off the films 3-D special effects, particularly in a scene that occurs during the credits. Whether the Minions will continue to be as entertaining with an entire movie devoted to them remains to be seen, but as far as Despicable Me 2, their seems to be just the right mix of Minions. If there is a weakness to Despicable Me 2, then it's the center of the film, as things do slow down and get a little repetitive as Gru tries to search out the mystery villain among various shop owners in a mall. However, the heartwarming beginning of the film, which focuses on Gru's parenting skills, and the action-packed finale make the overall film an enjoyable treat for the whole family.

Despicable Me 2 Review: Why Is It Dominating The Box Office?