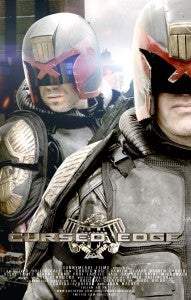 The first of six installments of Cursed Edge, a new webseries set in the world of 2012's fan-favorite comics adaptation Dredd launched today on YouTube. You can see it embedded below. The film, from director Oliver Hollingdale, bills itself as "from supporters of Make a Dredd sequel" and is the second slickly-made fan film with a pretty respectable budget that we've seen since the release of Dredd--but while the other, Judge Minty, was an adaptation of a story from 2000 AD, Cursed Edge is set in the world of the most recent film rather than the comics.