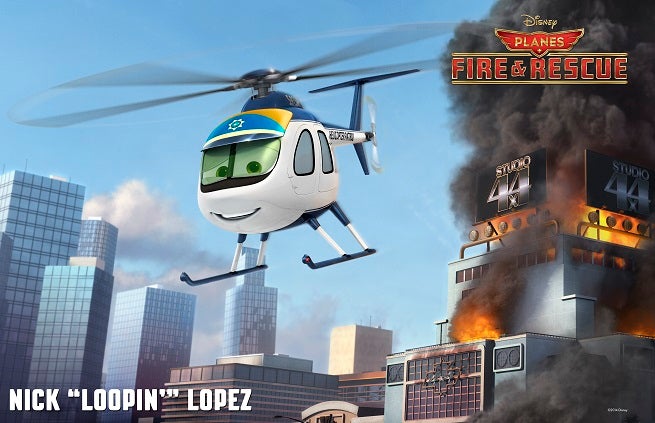 TV legend Erik Estrada not only appeared in this summer's Planes: Fire & Rescue from Walt Disney Animation -- he did so playing Nick "Loopin" Lopez, a police helicopter so completely evocative of his iconic role as Frank "Ponch" Poncharello that the first question in every interview would be how that happened -- except that he's very open about it: that was how Disney sold him on the role.

His affection for both CHiPs and Disney were evident in talking to him last month in support of the Blu-ray release of Planes: Fire & Rescue, which hit store shelves today.

So much so, in fact, that he's a bit skeptical of the idea of a CHiPs reboot, saying that the black-and-white (no pun intended) morality of the show would likely not play in an increasingly gray entertainment landscape, and that compromising the premise to make it more palatable to audiences would lose what was special about the series to begin with.

Obviously some of the Adult Swim type of stuff you've done is stylistically very different -- they choose to make it look cheap to serve the storytelling. Is it different to see your voice coming out of these super-sleek characters, versus something more stylized like that?

Adult Swim has its market and has its viewer. They do mostly cult shows -- but Disney, when you get into a Disney project, you know it's going to be delicious; it's going to be a great meal to have, and you're going to be able to sit down with your nieces and nephews and say "Come on, let's watch this, I want you to hear me." That's 90% of the real world, it's just a small percentage that's on the other side.

This is an interesting thing for you -- you're playing yourself, but as a helicopter.

It was great. I got the call to recreate my character as a helicopter, which made me laugh, so I took it [Laughs]. But then they explained how important it was in the movie -- seeing my parents in the movie as partners to Ed Harris's character, who's a helicopter who went back to racing and then to firefighting. They explained it to me and they said "We want to capture the essence of Poncharello, his character." I said "Sure, great, let's do it." And it was great. It was great working for Disney. I've raised my children on Disney movies and Disneyworld and Disneyland, so it was a coup for me.

Is this actually your first time working with them?

Yeah, nothing else. I've done a lot of other networks and other shows, but working for Disney I thought was really nice. It was a lot of fun and when they screened it privately, I got to see a lot of the people I haven't seen in a long time, and to meet some of the other actors and see what voice goes with what character. It was a great experience, the whole thing. The premiere at the Egyptian Theater was so fun and everybody was there. I got to see Stacy Keach, who I haven't seen since we did The New Centurions back in 1971, and to spend time with Ed Harris, who actually did an episode of CHiPs.

He's such an iconic character that this isn't the first time you've played off of Ponch, even if it is the most kind of overt and direct. What do you think it is that keeps it fresh in people's minds?

It's just that whole time in America was a wonderful time. It was post-Vietnam, the music was fun, the show was fun. It was exciting to see motorcycles ripping through the streets, car wrecks, crashes and chases. And the fact that it was a show for which most parents could just park their kids in front of the TV to watch it and not really worry about what they're going to hear, what they're going to see.

We never even drew our guns, you know what I mean? And it had a tremendous impact on people's lives. A lot of people got into law enforcement or they became firemen or first responders, paramedics; they were inspired into service because of the show. It also created a relationship between children and law enforcement. They weren't afraid to say hi to the cop on the beat. It had a lot of impact and people just loved a good time. Most of the people watched the show with their siblings at 8 o'clock Sunday night, prime time, family hour, so it gives them warm, fuzzy feelings of good times watching the show.

It seems like every few years, somebody takes a swing at rebooting it.

Do you think it would be difficult to recapture the feeling of the show?

It would be kind of difficult to do that show today without having all this visual sensationalism that we've all become accustomed to now because of TV and so many channels and the way the movies are going. I'm sure there would be a tremendous amount of special effects if they do a CHiPs movie. And the truth is, they'd probably have to go out of the box and they'd probably have to do things that the California Highway Patrol themselves would not endorse because they won't tolerate anything improper, inappropriate behavior by their officers. So it would be tough to make. You'd have to make it super visually enjoyable because it would be very difficult. I don't know how they would do that, especially compared to that time in America in TV and now. It would be tough.

Yeah. When you look at most police procedurals now, there are officers crossing that line into illegality, or trying to conspire to figure out how to "get around" a suspect's rights, and you have to kind of root for that because it's the protagonist. You guys were one of the last shows that depicted police going really by the book.

Yeah, we never crossed a line in the law enforcement department. The only thing that ever got crossed was with my character's personality. He would have an outburst and then back up and say, "Oh, I stepped in it." Today, it would be kind of tough but it would be interesting. I would definitely go see a movie made of it to see how they would portray that and how they would get around that.

When you're going into something like Planes, you don't have to worry much about that and I'd imagine you could embrace the character in a similar way.

Oh, no. I embraced him as Ponch, and his atttitude as if he was in an episode of CHiPs. Same attitude, same feel. Whatever venues of my character they wanted to have, I gave it to them, and it was great.

It was a really good film to watch. Fun to watch -- the graphics are incredible, the artwork, forget about it. The chase -- the flying chase to get the water, the whole thing, the bridge, was just very strong and also there were some real funny moments in that movie.

Erik Estrada Talks Planes: Fire & Rescue and Why He Has His Doubts About a CHiPs Reboot