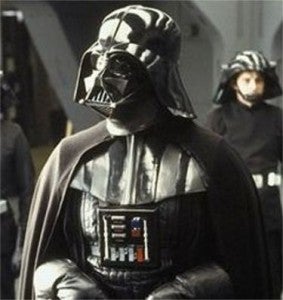 Among many Star Wars fans, the second Star Wars trilogy didn't live up to the expectations set by the first Star Wars trilogy. In an interesting new interview from the Hull Daily Mail, David Prowse, who played Darth Vader in the original Star Wars trilogy, gives his opinion on the Star Wars prequels, which made up the second trilogy. Prowse said, "I didn't like Star Wars I, II and III at all. I think the common opinion now is they were really bad movies." Prowse also added, "There's no comparison with the original movies. They had a much more believable story." Well said, Darth Vader. As far the upcoming Star Wars Episode VII, it doesn't appear as if David Prowse has been asked to return yet, even though he would welcome the idea. Prowse said, "Unfortunately, Darth Vader was killed off. But it would be nice to come back and do another character, because no one's ever seen my face. I was never unmasked." Note: A different actor's face was shown when Darth Vader was unmasked in Return Of The Jedi. Of course, the fact that Disney doesn't seem to have asked David Prowse to return yet, doesn't rule out the possibility that Darth Vader might return in some form or fashion. Since Prowse's face was never shown in the movies, Disney could always be planning to use a different actor if they figured out a way to make Darth Vader live again.