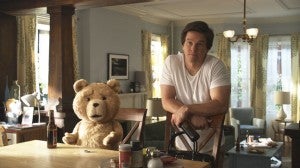 Last year, there was a bit of a kerfuffle over who would host the Academy Awards ceremony. Eddie Murphy was attached, but then the show's producer, with whom Murphy had a good working relationship, had to step aside and Billy Crystal was called in at the last minute to stop the bleeding when Murphy bailed. It was, by most accounts, a forgettable Oscar night. Not terrible, as when Anne Hathaway and James Franco hosted, but also nothing that would drive the Academy to beg Crystal to come back yet again. It's little surprise, then, that he was replaced--but the choice of replacement may surprise some: Seth MacFarlane, creator of Family Guy and...well, about a third of everything else on Fox these days. "It's truly an overwhelming privilege to be asked to host the Oscars," said MacFarlane in a statement. "My thoughts upon hearing the news were, one, I will do my utmost to live up to the high standards set forth by my predecessors; and two, I hope they don't find out I hosted the Charlie Sheen Roast." MacFarlane's first feature film, Ted, hit theaters this year and was a surprise hit, with a sequel already on the way.