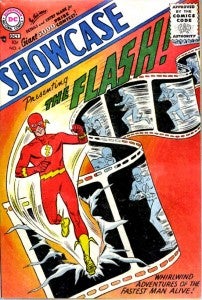 For everyone wondering what might be in store for Warner Bros after the last of Nolan's Batman trilogy and the Superman: Man of Steel reboot, it looks like a Flash movie could be pretty high on the list. If Marvel's The Avengers is the runaway hit that everyone suspects that it will be, then Warner Bros. will likely feel the pressure to start building up their own movie universe for an eventual Justice League movie. Blastr recently spoke with Wrath of the Titans co-writer Dan Mazeu, who also wrote a draft for a Flash movie. While Mazeu admitted that Warner Bros. probably would have liked for Green Lantern to have done better, he said, "Yeah, there is still a whole lot of excitement for the DC universe, and I know The Flash is very high on the list." Mazeu suggested that Warner Bros. was just waiting for things to come together with the right cast and right director for a Flash movie. Mazeu said, "Hopefully there will be some news soon, but right now I can't really say anything else." According to Blastr, Mazeu collaborated on his Flash movie script with Geoff Johns, but the script has been going through revisions. Mazeu's script apparently centered around the Barry Allen version of Flash, but there were also some things include that would make Wally West fans happy.

Flash Movie High On The List For Warner Bros.