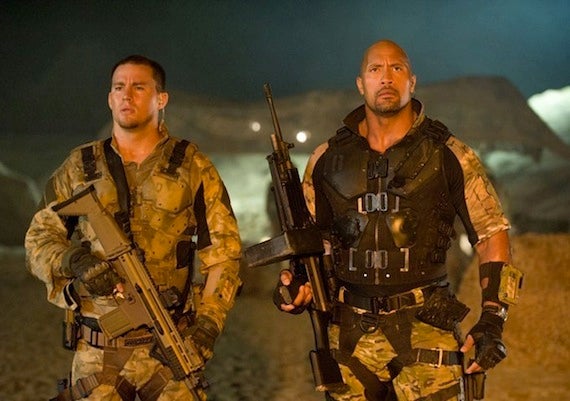 The next installment in the G.I. Joe franchise is expected to begin production in early 2015, according to a report at Collider.

The site spoke with Transformers and G.I. Joe producer Lorenzo di Bonaventura, who revealed that they've picked out a screenwriter and are in talks now.

"G.I. Joe 3 we are trying to get going, starting early next year," di Bonaventura said. "I think it'll be a little later than [January]. I think February or March is probably more realistic. We were originally shooting for January and I think it's slid a little bit, but you never know. It's still a little too early to tell yet."

While they haven't yet picked out a director, there's one name that's definitely out of the mix: Jon M. Chu, who has directed the previous installment, G.I. Joe: Retaliation. Chu is much in-demand right now, working on Jem and the Holograms and reportedly under consideration for big franchises like Masters of the Universe and The Fast and the Furious.

Asked about casting and characters, di Bonaventura told the outlet that Dwayne Johnson will return as Roadblock, but other than that was somewhat evasive. That said, it appears the cast will be growing to accommodate some of the classic Joe characters fans have been asking for.

"One thing is for sure: there were some characters the fans were really shouting for us to put in, we're gonna put in a few one of the ones that they know that would be new to the movie audience if they don't know the mythology," di Bonaventura said.

G.I. Joe 3 Going Into Production Next Year, Featuring The Rock and New Characters