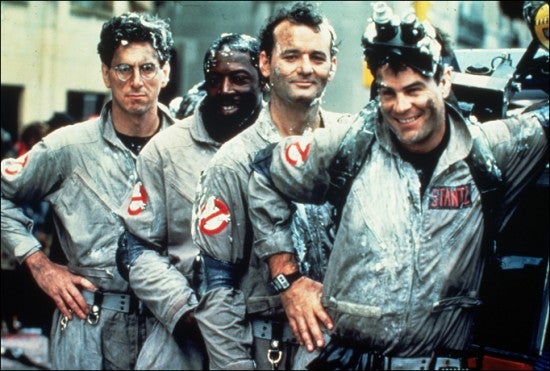 and Ghostbusters II director Ivan Reitman has decided to forego making the third installment of the lucrative Columbia/Sony franchise following the death of friend Harold Ramis, who wrote the first two films. Sony will move ahead without Reitman, according to Deadline, aiming for an early 2015 filming schedule. Reitman will work with Sony co-chair Amy Pascal to find a new director for the next installment of what they hope will be a rejuvenated series for the studio, who have only a few big tentpoles to call their own (and those -- James Bond and Spider-Man, most notably -- are licensed from others rather than owned outright). Reitman has been the main driving force behind making a third film for years, with Ramis content to play a small role as Egon Spengler, let somebody else write it and enjoy his revenue sharing and co-star Bill Murray reportedly not even willing to do that much. Without Reitman, it's hard to know whether the film would even have come this far...but now, it's an inevitability and the veteran director is pulling out. "There has been all kinds of stuff, unofficially written about Ghostbusters," Reitman said. "I've been reading things online for about four years, speculation on who's writing, what they're writing, who's in it, who we will use, and who's directing. We'd decided not to comment up till now, I wasn't sure what I was going to do, and it was never clear what Bill was going to do. A lot of things happened in the last few months, the most significant of which was the passing of Harold, who was a very good friend who was extraordinarily influential in my career. We did five movies together including both Ghostbusters." He added that one early draft involved the original Ghostbusters in a fairly major role -- a movie that couldn't be made without Murray, who wouldn't commit to it. A second draft was commissioned that dramatically reduced the roles of the original quartet in favor of another generation of younger Ghostbusters. That draft, written by Men in Black 3 and Idiocracy's Etan Cohen, had feedback only from Aykroyd, with Reitman and Ramis taking reduced roles. "Harold got sick about three years ago, and we kept hoping he would get better," Reitman explained. "I kept pushing forward on the Etan Cohen and we now have a draft that is very good, that the studio is very excited about." He said that it took a few weeks of thinking on it to be sure that he wasn't making a rash decision, but that it was almost immediately after Ramis's passing that he felt he might not be able to direct the next one. "When I came back from Harold's funeral, it was really moving and it made me think about a lot of things. I'd just finished directing Draft Day, which I'm really happy with and proud of," Reitman said. "Working on a film that is smaller and more dramatic was so much fun and satisfying. I just finally met with Amy and Doug Belgrad when I got back. I said I'd been thinking about it for weeks, that I'd rather just produce this Ghostbusters. I told them I thought I could help but let's find a really good director and make it with him. So that's what we've agreed will happen. I didn't want all kinds of speculation about what happened with me, that is the real story." Sony's Pascal said that they understood completely and that Reitman will continue to play an important role on the film as it moves forward. "I'm not going to say how many Ghostbusters there will be in the new cast, but we are determined to retain the spirit of the original film, and I am pleased that all of this seems to have happened organically," Reitman said. "I'm hoping we can get started by the fall, set in New York, but given the logistics and the stuff that happens, the beginning of 2015 seems more likely."