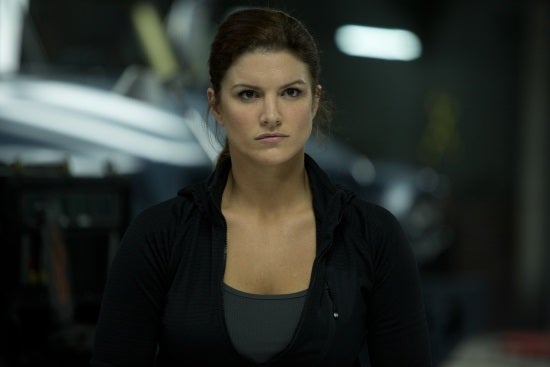 Back before Gal Gadot was officially cast as Wonder Woman in Batman vs. Superman, there were plenty of rumors that other actresses were being considered for the job. One of those rumors revolved around Gadot's Fast & Furious 6 co-star and former MMA competitor Gina Carano. Speaking to the Toronto Sun, Carano says there was never really anything to those rumors. "That started about four or five years ago, even before Haywire people were saying stuff like that," Carano says. "I was never approached, and I don't know if I was considered." However, now that Gadot has been cast, Carano say she is firmly in the Israeli model and actress's corner. "I worked with her on Fast & Furious 6, and she's amazing," says Carano. "Such a great person with such a solidness in her character, so I'm very excited for her to do that." Some fans insist that Gadot isn't built the way Wonder Woman should be and that someone with more physicality, like Carano herself, should have been cast. Carano simply encourages the critics to wait and see what Gadot can do. "I think people have an idea what they consider Wonder Woman. I definitely know (Gadot) has been training and there's so much more that goes into being a strong female character," says Carano. "I think people have their own idea, but I always like the underdog, I'm always rooting for the underdog. If the world says you can't do something, I couldn't care less because that's not how anybody should live their lives." Gal Gadot will make her debut as Wonder Woman in Batman vs. Superman, coming to theaters May 6, 2016.