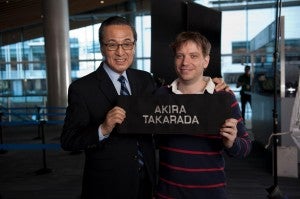 Akira Takarada, who appeared in 1954's Godzilla, will make at least a cameo appearance in the forthcoming American reboot of the franchise, set for release next year. That's the news coming out of a number of news agencies following the release of the photo at right, of Takarada and the film's director Gareth Edwards, taken on the set of Godzilla 2014. The photo has received ecstatic praise from fans on the movie's Facebook page, where one of the common comments goes something like, "This is already better than the previous American version."

Godzilla Remake To Include Star From the Original