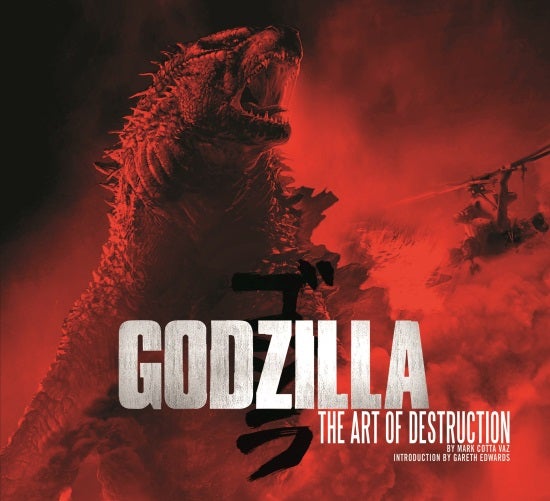 Insight Editions have revealed the cover for Godzilla: The Art of Destruction. Coinciding with the release of Gareth Edward's new Godzilla film, Godzilla: The Art of Destruction includes concept illustrations, sketches, storyboards, and other pre-production materials, as well as interviews with Edwards and key crew and cast members. Godzilla: The Art of Destruction will give fans a behind-the-scenes look into the making of Godzilla from concept to completion. In Godzilla¸ an ancient colossal creature is accidentally awakened by mankind, and seemingly leaves nothing but destruction in its wake, as its presence becomes known to the world. Toho Co., Ltd.'s Godzilla franchise contains one of the most widely recognized movie monsters worldwide, including more than 25 films, multiple television programs, video games and book series.  Gareth Edwards directs "Godzilla" from a screenplay by Max Borenstein, story by David Callaham and Max Borenstein, based on the character "Godzilla" owned and created by TOHO CO., LTD.  Thomas Tull and Jon Jashni are producing with Mary Parent and Brian Rogers.  Patricia Whitcher and Alex Garcia are serving as executive producers, alongside Yoshimitsu Banno and Kenji Okuhira.  Warner Bros. Pictures and Legendary Pictures present a Legendary Pictures production, a Gareth Edwards film, Godzilla.  Slated to open beginning May 16, 2014, the film is expected to be presented in 3D, 2D and IMAX® in select theatres and will be distributed worldwide by Warner Bros. Pictures, a Warner Bros. Entertainment Company, except in Japan, where it will be distributed by Toho Co., Ltd.  Legendary Pictures is a division of Legendary Entertainment. Godzilla: The Art of Destruction will be released May 13, 2014. Godzilla comes to theaters May 16, 2014.