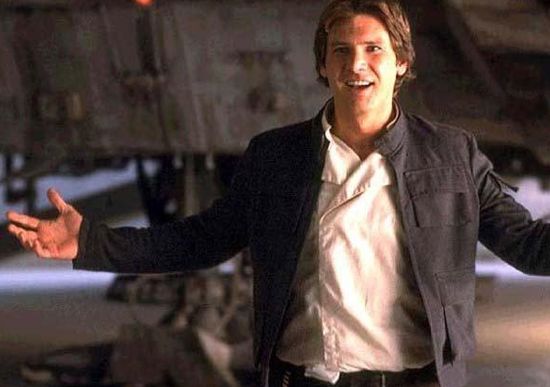 In a Reddit AMA earlier today, Harrison Ford answered numerous questions about Star Wars. However, the biggest question of if he will return for Star Wars Episode VII was left unanswered. Here are the questions that Ford did answer (and sometimes didn't exactly answer) about Star Wars. Reddit: Who shot first? Han Solo or Greedo? Harrison Ford: I don't know and I don't care. Reddit: Are you still mad at Lando? Harrison Ford: Lando who? Reddit: What would you rather fight: 100 chicken sized Jabba the Hutts or 1 Jabba the Hutt sized chicken? Harrison Ford: The latter. Please. Reddit: Who did you prefer portraying, Han or Indiana? Harrison Ford: I think Indiana Jones was a lot of fun to do because of the places we went to and the adventures and the action. But Han Solo was also a huge part of my life. Reddit: If you and Mark Hamill fought who would win? Harrison Ford: Me, of course. Reddit: Favorite non-movie Star Wars product? Harrison Ford: I don't know anything about it, sorry. Reddit: Did you ad lib Han's famous line "I know"? Harrison Ford: It's not really an ad lib, it was a suggestion, and movie making's a real collaborative process at its best. You don't ad lib it, you suggest it and then you try something in rehearsal and then you agree. So it was my suggestion, because I thought it was more of a character line than what was written, but the director and Carrie and I all thought it was a good idea at the time so we did it. Reddit: How did you feel about Star Wars when you first started? How were you approached? Harrison Ford: I was approached with the offer of a job, which at that point, was all I wanted to hear. I had helped George Lucas audition other actors for the principle parts, and with no expectation or indication that I might be considered for the part of Han, I was quite surprised when I was offered the part. My principle job at the time was carpentry, I had been under contract as an actor at Columbia and Universal. I had a house at the time I wanted to remodel, a bit of the wreck of a house. I'd invest money in tools but wouldn't have money for materials, so I realized this was another way of putting food on the table. And allowing me to pick and choose from the acting jobs that were being offered at the time. Reddit: Can you elaborate on what happened between you and Chewbacca that lead to you having a falling out? Harrison Ford: Ha. Well that was a skit for Kimmel, I think. With his writers, the idea behind it was that Chewbacca had borrowed my fictional wife. Reddit: Who would win in a celebrity boxing match: Han Solo or Indiana Jones? Harrison Ford: The promoter would win. Reddit: I love you. Harrison Ford: I know.