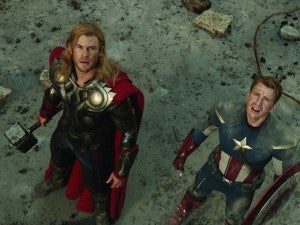 For the last few years, every time a new superhero movie is released there has been at least some percentage of the mainstream movie critics whose reviews were permeated with the "Oh--anther one? Haven't we had enough superhero movies yet?" line of logic. That their glib, feigned disinterest was no more original than they implied the movie to be seemed immaterial to these reviewers; it was more important that they had an attack on the genre to fall back on when their attacks on the movie in question were apparently insufficient. "It's all been leading up to this, and it's paid off. Big time," writes Dan Hudak, the critic behind Hudak on Hollywood, of The Avengers. Hudak was one of the many critics who speculated that Green Lantern's poor showing might reflect a general sense of malaise brought on by too many superhero films made in too short a time, and who redoubled his efforts later on against either Thor or Captain America: The First Avenger, I can't remember which. He gives Avengers 3 1/2 stars, a higher rating than either of the three aforementioned films, and makes virtually no mention of other superhero films in his gushing write-up. Maybe it's too much to ask, and maybe it's naive to think it could happen--but with a Rotten Tomatoes score in excess of 90% and nary a critic saying, "If only there weren't another Batman movie coming out this year...", it almost seems like the unqualified success of The Avengers has given us an even greater gift than a fun night at the movies: the knowledge that we may not have to hear that same insipid review one more time again soon.

Has The Avengers Defeated the "Too Many Comic Movies" Review?