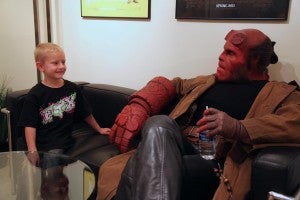 Director Guillermo del Toro and star Ron Perlman told Entertainment Weekly earlier today that they want to make another installment of their blockbuster Hellboy franchise. "I can say publicly that now we are together in trying [to do Hellboy 3]," del Toro is quoted as telling the magazine. Neither a studio nor Hellboy's creator Mike Mignola have yet been approached, although presumably they've heard it by now. More or less ever since Hellboy II hit the theaters and Perlman took a gig on AMC's Sons of Anarchy, the reports have been that the third film wasn't likely to happen anytime soon due to the sheer time and effort it takes not only to shoot a movie on that scale, but to get Perlman into and out of makeup every day. Perlman now appears less concerned with that aspect of the film and more on the storytelling. "The [first] two movies were really set up to have this unbelievable resolve," Perlman told Entertainment Weekly. "Everything that was done in both movies was leading up to this destiny, written in stone, of what Hellboy has been summoned to Earth to do. To not do it, particularly in light of the scope that Guillermo is thinking of for the resolve, would be in my mind a little bit of a shame." It's no coincidence that this announcement comes so close on the heels of last week's appearance by Perlman as Hellboy for a boy with leukemia--but not in the way you think. While some fans intuited that a new movie might be in the offing when they saw Perlman in the makeup, it's actually the other way around, according to del Toro:  "I've encountered a lot of kids who are fans of the movies," said the director, "but to hear the story of this kid who was watching the movies while going through treatment, it really just moved me a lot."

Hellboy 3 Back on The Radar for del Toro, Perlman