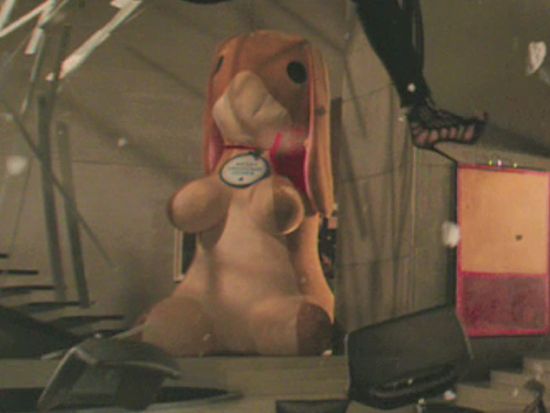 The Iron Man 3 trailer seems to indicate that fans will be getting a much darker version of Iron Man. Iron Man 3 is even being compared to The Dark Knight Rises, because the central theme appears to revolve around a fallen Tony Stark. The Iron Man 3 trailer is non-stop action, filled with explosions, destruction, and one giant, fluffy stuffed bunny. Wait a minute…did we say one giant, fluffy stuffed bunny? In a "which of these things does not belong" moment, a giant bunny can be seen in the background when Tony Stark's Malibu mansion comes under attack. Where did the giant bunny come from? What is the giant bunny wearing around its neck? Are those upper arms or breasts on the giant bunny? While Iron Man 3 bunny conspiracy theories are flying around the Internet, the most plausible explanation is that it was probably a gift from Pepper Potts to Tony Stark. In another scene from the trailer, Tony Stark is shown getting some type of operation in the hospital. The giant bunny appears to have an arc reactor hanging around its neck, so we're betting it was a get well soon gift from Pepper to Tony. Of course, then again, it could also be that Agent Coulson returned from the dead is hiding out in the giant bunny to keep an eye on Tony Stark for Nick Fury. Of course, like every Internet sensation, the Iron Man 3 bunny also now has its own twitter account with the handle StarkBunny. Here's a tweet from Bunny Stark, "Last Friday, Dr. Bruce Banner came over for a slumber party with Tony and they ate pizza and played Clue and discovered a new element."