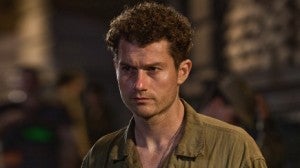 James Badge Dale, star of TV's The Pacific, will appear in Shane Black's Iron Man 3 as a villain named Savin, according to a Deadline report. MTV's Splash Page figured out quickly that it's most likely Lieutenant-Colonel Eric Savin, best known to fans as Coldblood. Coldblood is the designation for a cyborg soldier created using Savin's body after he was killed by a land mine. The character could plausibly tie into The Avengers, because he was investigating super soldiers at the time of his death--although that would be a plot that would have to run parallel to the main Extremis-inspired storyline for Iron Man 3, of which Coldblood was not originally a part. More likely, Splash Page speculates, is that they'll tinker with the origin to make Colblood's roots more compatible with the super-science already at play in the film. Badge Dale reportedly just wrapped shooting on Disney's Johnny Depp version of The Lone Ranger.