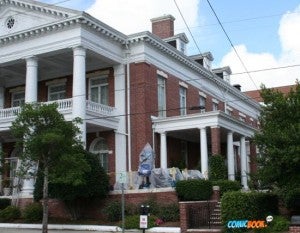 As our readers learned yesterday, ComicBook.com has boots on the ground at the Cape Fear Club in Wilmington, NC, hoping to get some early, exclusive photos from the set of Iron Man 3. Well, with streets blocked off and filming yet to begin, we haven't got anything new for you yet (the shot at left is from yesterday), but we've been talking to some people close to the production in Wilmington and have confirmed earlier rumors that some of the film's story will take place in Miami, Florida. Any chance he'll run into Michael Westen? I'd pay to see a Burn Notice/Iron Man crossover. At any rate, an unnamed, but trustworthy, source close to the production told one of our editors last night that he had seen emergency vehicles--police, ambulance and fire-rescue vehicles--emblazoned with logos for the city of Miami and Miami PD being unloaded from production trucks near the closed part of the set last night while crews prepared to begin shooting Iron Man 3 at the Cape Fear Club later today.