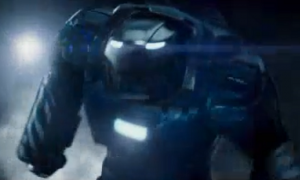 With the new Iron Man 3 trailer now officially online, fans have yet another pretty substantial look at the film, complete with quite a bit of new footage, some of which the audience has been eagerly waiting for. It doesn't answer a lot of questions, although some of the questions it raises seem to answer some others. So besides the old standby of "who's dragging Iron Man down into the water?", what new questions did we want to ask while watching? Is that really Hulkbuster armor? It's been widely reported that the "Hulkbuster" armor from the comics will appear onscreen and, of course, that's what lots of people are going to assume we saw in that final shot. .It's not entirely unlikely, but we have to wonder whether that's a plot thread they really want to be exploring just yet: the idea that Hulk is a threat that needs a response from Stark. What else could it be? Well, maybe it's a modified version of the Rescue armor, which we've heard Pepper will be donning in the film. It would make sense that if Tony were ever going to let his girlfriend, who he talks about protecting in this movie, get into the action at all, she'd have to be pretty well-insulated.

Who's controlling the Iron Army?

I mean, sure--Tony is a control freak, and he would want to be in charge of all of them, but that's really just not plausible, is it? Even somebody as smart as him can't simultaneously control more than a dozen androids while squaring off against a foe as formidable as The Mandarin. During the planning, travel and early attack stages I could see it--but who's behind the suits of armor that Tony and Rhodey aren't wearing during the big stuff? Is it Pepper? Maya Hansen? Are they automated? A little of everything?

Is War Machine on bodyguard duty? If anyone has wondered why "War Machine" would be renamed as "Iron Patriot," here's a pretty obvious answer; from the screenshot at right, he appears to be on Secret Service detail, at least part of the time, protecting the President and Vice President. That explains a couple of things. First, it tells us why someone like Tony Stark would find themselves on board Air Force One in time for the daring rescue that we've seen over and over again since Iron Man 3 stills and trailers started being a thing that existed in the world...and secondly, the name change. After all, for political reasons, does anyone really want a guy called "War Machine" standing outside the door when you're having diplomatic talks? How many guys with powers will Tony be fighting? This is an old question, raised time and again throughout the casting process when each new name introduced was attached to a famous Marvel villain--but in the recent past, all of the focus has been on The Mandarin and the challenge he'll present. Still, in this trailer we get a look at what appears to be Extremis chambers, with a handful of guys in them. If the comic book source material is any guide at all, that can't end well. What's all this "good, old-fashioned revenge" stuff? The more we see and hear about this film, the more it seems like we might be in for a character death. There have been two of them rumored, but it's nearly impossible to believe that Pepper Potts will actually die (even though Gwyneth Paltrow has expressed reservations about playing the role for much longer). Granted, the idea that Tony wants revenge is by no means a guarantee that someone close to him dies--but does a guy with more money than God really get so visibly and audibly shaken when somebody drops a bunch of his stuff into the water? It's hard to imagine.