With the official Iron Man 3 trailer scheduled to be released at 12:01 AM PT on October 23, there are already a lot of questions raised from the two teaser trailers. Comicbook.com already addressed one of the major questions revolving around a possible Hulk cameo in Iron Man 3. Even though a barefoot man in tattered pants might remind us of Bruce Banner, it's likely just Tony Stark after one of The Mandarin's surprise attacks. Here are five other questions raised by the Iron Man 3 teaser trailers.

Who Is The Red-Head?

– It looks like Pepper Potts might have some competition for Tony Stark's affections. A beautiful redhead grabs Tony Stark by the collar and pushes him up against the wall, before going in for what looks like could be a romantic kiss. While we're not sure exactly what character the redhead is supposed to be, the actress playing the part looks to be Stephanie Szostak.

Who Is Tony Stark Visiting In The Hospital?

– While Tony Stark is usually happy to talk to the press, he doesn't look to be particularly happy as he is mobbed by reporters while leaving a hospital. Who was Tony Stark at the hospital visiting? A source told Comicbook.com that Gwyneth Paltrow was involved in a scene inside the hospital where Tony Stark was leaving, so our guess is that it was Pepper Potts.

What Are The Police Looking For?

– While a somber James Rhodes in a formal U.S. Air Force uniform fills up the screen, what is more interesting is what is going on behind him. There appear to be several police officers searching a desk. Are they in the Oval Office? Is it the President's desk? Could something have happened to the President?

What Is Happening To Pepper Potts?

– Many have speculated that Pepper Potts will don some armor in Iron Man 3. However, in the teaser, it looks like Pepper Potts might be locked in some type of torture device rather than trying on armor. What exactly is happening to Pepper? 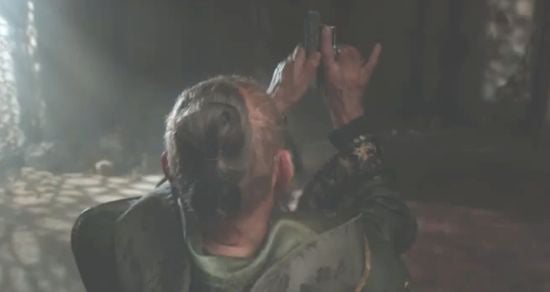 Why Does The Mandarin Have A Gun?

– In the comic books The Mandarin has ten powerful rings. However, in the teaser trailer, The Mandarin is shown wielding a gun instead of rings. Why would The Mandarin need to use a gun?