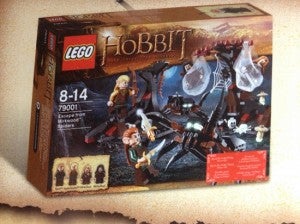 , The Amazing Spider-Man and even Man of Steel have all had plot points spoiled on the packaging of Lego brand toys before the movies ever hit the theaters--and now it looks as though The Hobbit: An Unexpected Journey can join that list as well. The first of Peter Jackson's prequels to his Lord of the Rings trilogy is due in theaters this winter, but the box art at right seems to suggest that LOTR favorite Legolas (Orlando Bloom) and anticipated newcomer Tauriel (Evangeline Lilly) will appear in the first film, rather than the second as had been widely previously speculated. Comic Book Movie picked up the image, which was originally posted at the Lego Toy Story News Flickr page. The playset is set in Mirkwood, where Gandalf, Bilbo and a band of dwarves face off against giant spiders (pictured) in the book.