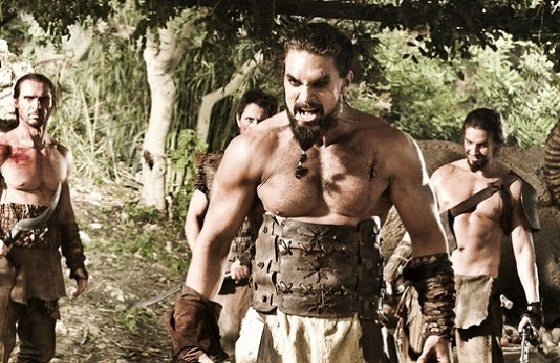 Today at the Motor City Comic Con was a day full of amazing panels. One that I had the privilege of attending was the Jason Momoa/ Game of Thrones panel. While it was unlike any panel I've watched on the internet or even been too, it was a blast to be at. Jason Momoa grabbed the microphone and went around to each person who had a question and emceed the whole event on his own. While there were many questions for his role as Khal Drogo in Game of Thrones, surprisingly no one asked about the rumors of him being a part of Zack Snyder's Man of Steel sequel. I couldn't let that slide, so about a half hour into the panel I took it upon myself to ask him what millions of comic book and movie going fans have been pondering. So I went ahead and asked, "Is there any truth to you being in the Man of Steel sequel? There's been a ton of rumors." Without missing a beat, Momoa responded with, "What does everything tell you? No. Stop asking me. It's so annoying. Sorry, you're not annoying." Then he noticed my Motor City Comic Con press badge. "Oh you're the press? Get the f*** out of here. Here, put this in there -- you're a d***, you're a d***." The whole crowd started laughing at his singsongy statement and a good time was had. "You're not a d***, I'm just playing." Momoa continued talking about the rumors after another attendee asked if his girlfriend could get a hug, "You know what, I think it started when people said 'What superhero would you play?' And I'd say Batman and Superman, they'd be awesome together. Then people were like, 'He's in Batman vs. Superman!' I'm like, I really like Lobo. 'HE'S LOBO!!' And then some asshole was like 'He's Aquaman!' And I'm like - what did you just call me? Where the f*** do you pull out Aquaman? Seriously.. And then it shows up on the internet. Not that it's a bad rumor." Well, there we have it. It seems like hopes of Momoa being Aquaman or Lobo are just mere rumors, and STOP ASKING HIM. Best panel ever.

Jason Momoa Explains How Batman Vs. Superman Rumors Got Started