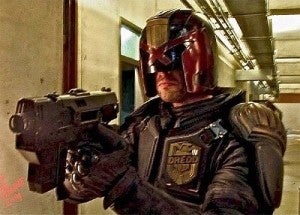 Karl Urban, the Star Trek Into Darkness star who headlined last year's Dredd 3D, believes that the ongoing fan campaign to keep the franchise alive could be successful, and as a result, he's watching the sequel petition and related news stories carefully. Asked whether he thought fans could realistically bring about a sequel to the film, which is based on the decades-old comic book character who appears in 2000 AD, Urban was unequivocal. "I certainly do, and it was really amazing to see the response to Dredd," Urban told Digital Spy at San Diego Comic Con International last month. "Particularly when it went on sale in ancillary markets, you know? Like when the DVD went on sale and it sold something like 650,000 units in a week. I mean, that's incredible." You can check out his full comments from Comic Con directly below.

"Wow, yeah, I'm watching that with great interest actually," Urban told Crave Online. "Of course I would love nothing more than to come back and make another one of those films. I had such a great time making it and really, I support it wholeheartedly. I guess it's up to people. If they make enough noise, if they buy enough of the DVDs then sure, it's a possibility." He added, "I don't quite know the full mechanics of how it breaks down in terms of what the real financial reality is to make a sequel to Dredd, but I am really heartened by the fact that just about every day, every single day, people come up to me and tell me how much they love that movie and how much they want to see more. We'll see."